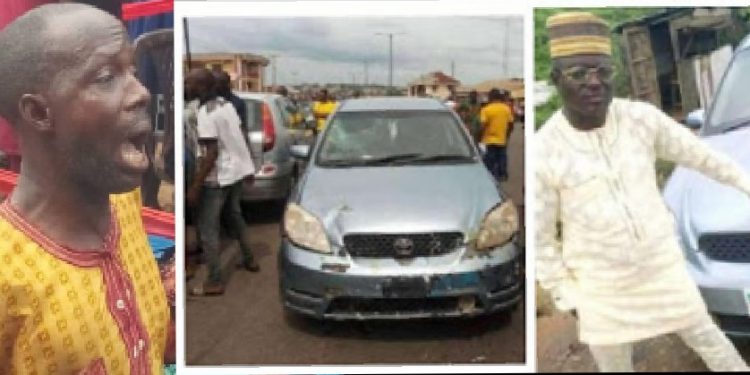 The identity of the driver of the Toyota Matrix car that crushed a young child in Ogbomoso, Oyo State during the local government election campaign on last Thursday, has been revealed, Ogbomoso Info reports.

Facts had emerged on how over 250 commercial buses and other cars accompanied the state governor, Engr. Seyi Makinde to campaign in Ogbomoso last Thursday.

Eyewitnesses confirmed how most of them (drivers) were driving recklessly from Tackie en route to the venue of the campaign in Oja- Igbo, Ogbomoso.

Chief Press Secretary to the governor, Taiwo Adisa, had denied that the girl was killed by a vehicle in the convoy of his principal, said, “Seyi Makinde was not involved in the accident that led to the death of a girl during the local government election campaign in Ogbomoso on Thursday.”

Adisa, who expressed the governor’s condolence to the family of the deceased child, said that contrary to the story alleging the killing of the child by a vehicle in the convoy of the Oyo State governor, the girl was killed by a Toyota Matrix car.

According to the governor’s aide, the vehicle was said to have lost control after its front tyres deflated while in motion, close to the venue of the Peoples Democratic Party (PDP) campaign rally.

Adisa said the governor’s convoy had arrived at the Oja-Igbo Town Hall venue of the rally, with the governor and his entourage settled in before the incident occurred.

An eyewitness established the fact that Alade’s car was one of the unregistered vehicles carrying various inscriptions announcing the power vested in their overall boss (Mukaila Lamidi, also known as Auxiliary) as Chairman of Park management system in Oyo state.

Immediately the incident occurred, the (PMS guys) thugs in the governor’s entourage knew the implications of what they had done and they tried to conceal the identity of their colleague who committed the murder. They removed the implicating sticker on the vehicle.

It was gathered that the PMS guys launched attack on some Ogbomoso youths who were raising alarm when they (PMS guys) removed the implicating sticker.

One of them who spoke to Ogbomoso Info reporter under anonymity recounts his experience. He said scores of them were brutalized and are presently in critical condition in an undisclosed hospital.