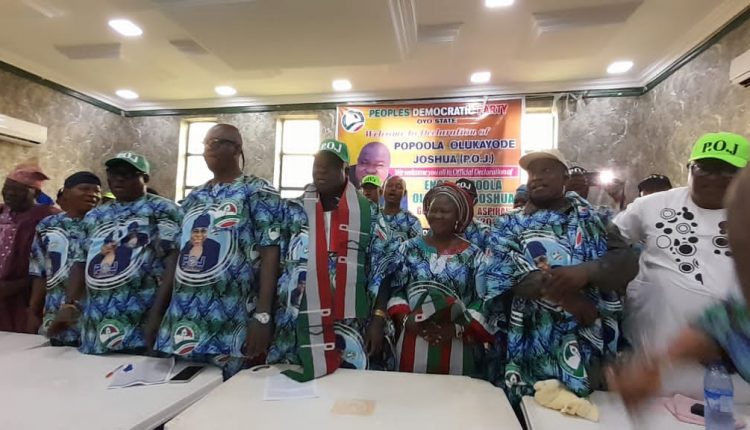 It would be recalled that several leaders of the party in the state, the south west region and national levels all intervened with a bid to finding a lasting solution all to no avail.

A source within the aggrieved members who spoke with our source on condition of anonymity said Alhaji Olopoeyan’s resignation from the PDP was the final stage before officially declaring for the new party he is leading his followers into.

The new party according to the source is New Nigerian People’s Party (NNPP). The new party will be used to fly the agenda of a new political aspirant who is expected to battle the 2023 Governorship seat with the incumbent, Governor Seyi Makinde.

Engr. Popoola Olukayode Joshua popularly called POJ was also said to be ready to declare his Governorship ambition on the platform of the new party, NNPP any moment from now.

Declaring his Governorship, POJ’s statement reads partly, “As we are ruminating on these questions, I want to tell you dear supporters that today is not time to exhaust our need to get alternative to represent us in 2023 governorship election in our dear party, today is for another business.

“In the face of the aforementioned, with great enthusiasm, love for our state, fierce commitment to a vision of rapid progress, and encouragement of family, friends, associates, and well-wishers, I offer myself and declare to contest the 2023 governorship election in Oyo State on the platform of our party, the PEOPLES DEMOCRATIC PARTY ( PDP). I am equipped to defeat the Incumbent.”

Sunrisebulletin gathered that POJ was the only aspirant who publicly announced his political ambition to wrestle power from Governor Seyi Makinde on the platform of the PDP but events took a new turn according to the source who affirmed that the entire PDP structure in Oyo state is under the firm control of the incumbent Governor with whom it may be difficult if not impossible to wrestle the PDP Governorship ticket ahead of the forthcoming general election.

The source also disclosed that Olopoeyan and others will publicly announce their new political party (NNPP) officially anytime between now and the coming week as political activities heightens ahead of 2023 considering the new Electoral Act Amendment Law which stipulates guidelines for all political parties before election.