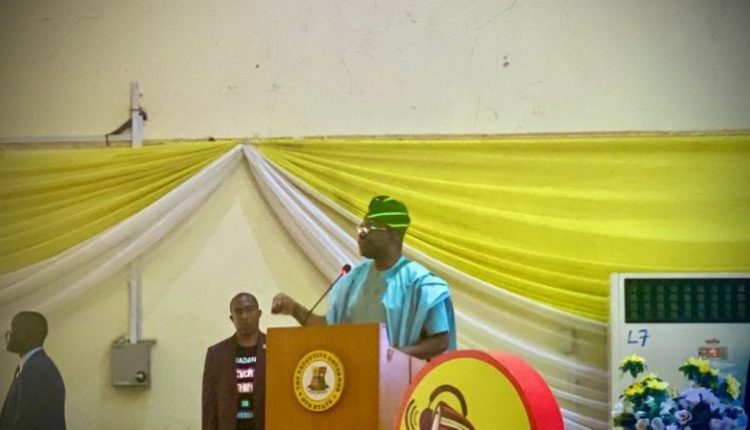 Sahara Reporters vs Oyo Govt: I Will Resign as Oyo Governor if Contract was Inflated — Makinde

Governor Seyi Makinde has vowed that he would resign if the case of the notebook contract awarded to Oriyomi’s company was indeed found to be inflated as claimed by Sahara Reporters, an online investigative newspaper based in Lagos.

The Governor revealed he would sue Sahara Reporters for peddling false claims about his administration on social media.

He stated this today while attending the 1st anniversary of Agidigbo FM at the International Conference Center, University of Ibadan.

Clearing the air on the issue, he said: “Yesterday, I read on the Internet that Oriyomi inflated a contract worth N998 million to supply exercise books. It is not Oriyomi’s image that they want to tarnish, it is mine. But, they can’t confront me to ask for details about the contract. Well, the inflation is a false claim.

Anything you hear from me is the truth and nothing but the truth. If they do not know where we are coming from, they would see where we are going to”.

Further in his remarks, Makinde who claimed he had not seen Oriyomi after he read the fake news, encouraged Oriyomi to sue Sahara Reporters. He added that the government of Oyo state will also institute a separate suit against them.

“I want them to hear clearly. By the time we are done with them, they will not have the guts to publish lies about the Oyo State Government anymore. What they wrote was that the exercise books we gave to students in the state were supplied at N2100 per piece. Sahara Reporters, in the article, said it did a thorough investigation and did a market survey showing that the cost of an exercise in the market should not be more than N250 per piece. If the amount paid by the Government to the contractors to supply each exercise book was more than N300, I will resign as the Governor of Oyo State”, the number-one Oyo citizen reaffirmed.

Earlier, he commended Alhaji Oriyomi Hamzat and his team at Agidigbo for their 1st anniversary of transmitting as a radio station in Ibadan and establishing Agidigbo FM in Lagos as well Agidigbo Television.

He assured the team of his continued support for him.

Congratulating the management and staff of Agidigbo FM, he stated;

“You can see that when one is committed, within a few years, you can succeed at whatever you lay your hands on. Success does not necessarily have to take long years if you are committed to what you are doing.

One year ago, when I attended the opening ceremony of Agidigbo FM, I saw that a sizeable population of the workforce were youths. People usually assume that youths don’t have experience. However, they have the energy to work. With a few experienced people in their midst and these energetic youths, the product is what we are seeing today.

I want to congratulate everyone that works at Agidigbo FM and I want to tell you that the Oyo State Government, under my watch, will continue to give you support”, the governor said.

Few people may not know that this young man is committed to freedom for the poor and that is what brought us together. I was not a governor when I knew him. In his quest to protect the right of the less privileged, he has suffered a lot. He has been detained by the DSS, his equipment was seized. He has been framed for murder, I got involved in that particular case (this was before my election as the governor).

For me, if we have the opportunity to ensure that the voice of the people of Oyo state is being heard, we will support Oriyomi. It is not as if we do not quarrel, we quarrel often, especially when he feels the government is not doing enough in one area or the other or when people lodge complaints to him about the government.

I am happy that Agidigbo FM is celebrating its first anniversary and I pray that they celebrate many more years.

Oriyomi Hamzat has laid a foundation and I pray it will outlive all of us. A legacy that will stay for a very long time to come”.