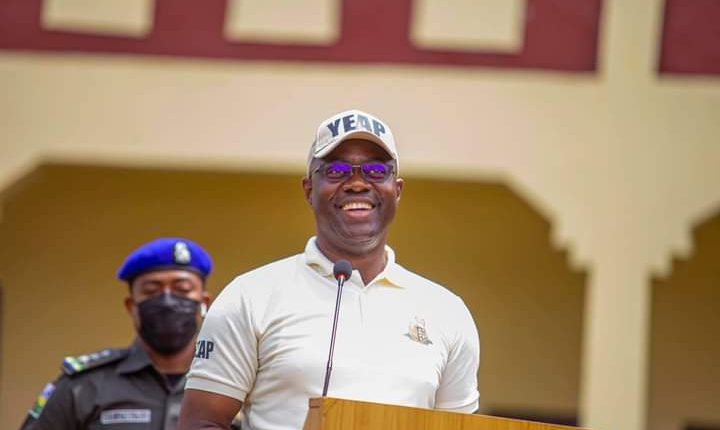 People may have been wondering about how Seyi Makinde has been doing well since he emerged the Governor of Oyo State.

He has been no doubt working to correct the mistakes allegedly committed by his predecessors, so as not to give rooms to usual and traditional ways of doing things.

Strategically, Makinde has come up with certain blueprints through which the masses and general inhabitants in the pacesetter state will experience good good governance and the benefits attached to it.

Though his performances and inability to please people at the party level have been making them lamenting, especially the stakeholders, party members, people whom we could call leaders and some abandoned ones who alleged him of not doing their will.

And the reason is not farfetched, he already knows that if he allows them to have their ways into his heart, he wouldn’t have the time to focus on what the masses really need.

Seyi Makinde is a man of the masses. He knows the suffering of the masses, check out what he has been doing for the pensioners across all the ministries in the state.

It’s amazing because there is no ministry the governor hasn’t touched as his performances within two years in office have automatically outshined some of his predecessors.

It’s amazing that within two years of administration, he has commissioned so many projects, like classrooms, roads and other areas of human benefits.

The good projects he did had no doubt made him qualified for 2023, though he has not said anything concerning next ambition, good works and good people of the state have tipped him to throw hat into the ring.

He humanly and considerably announced the reduction of tuition fees at LAUTECH by 25% on the 2nd of June, 2021 in which the immediate past governors found difficult to do.Recall that LAUTECH is now managed and owned by Oyo State.

Again, he increased the allowance of the NYSC from #5,000 to #15,000 which had never happened in the history of Oyo State.

The governor is trying to satisfy the masses but he still needs to let the people of Oyo state realise that he is the governor they voted and not someone like Chief Seye Famojuro, who is being regarded as the de facto governor of the pacesetter state.

Makinde should have the knowledge and affirm that he is the one in power and shouldn’t allow Seye Famojuro to keep dictating and get into his head behind the scenes, because if he allows that to happen, it will certainly tarnish his image and render his good work useless.

He needs to be careful so that the opposition will not use Seye Famojuro’s issue against him, because since he assumed the position of the state governor, Seye Famojuro who has no business with the administration has been seen with him and dictating who gets what.

Irrespective of personal relationship, the person in question shouldn’t have anything to do with his government. It’s not sane for someone like Makinde to continue using Seye Famojuro to monitor projects, it will only be considered that Seyi Makinde is using him to embezzle and siphon huge amount of money out of the treasury of Oyo State.

The governor should at least hands him off in Oyo State projects. If it continues like that, Seyi Makinde should just forget about 2023.

It is quite unfortunate that someone like Seye Famojuro remains the de facto governor who controls all the cabinet members in Seyi Makinde’s led administration and has domineering influence across all the ministries, departments and agencies

Furthermore, he needs to embrace and honour the leaders because he gets to be known by them, they were the ones that opened the door through which he was accepted.

For example, Olopoeyan and Mulika, he shouldn’t allow little misunderstanding between them to hinder the good relationship they have built for so many years.

These are great leaders, he should settle the disagreement between them because failure to do that will affect his second term bid.

And to be candid, I’m highly disappointed in Arapaja because how on earth will he pay a visit to Auxiliary at his residence? It’s highly ridiculous for the Southwest PDP vice chairman to pay that type of a visit. It actually connotes that the guy was instrumental to attainment of his exalted position.

Nevertheless, I acknowledge Seyi Makinde’s good work. He has performed beyond expectations because there are still many projects to be unveiled like terminal bus, and likes of them. It’s amazing on what he did at Challenge roundabout but of which I got to know that it’s the same person I’m talking about that handled the projects.

Seyi Makinde needs to be very careful with Seye Famojuro before it’s too late for him.

EXCLUSIVE: How To Use Twitter In Nigeria Without VPN