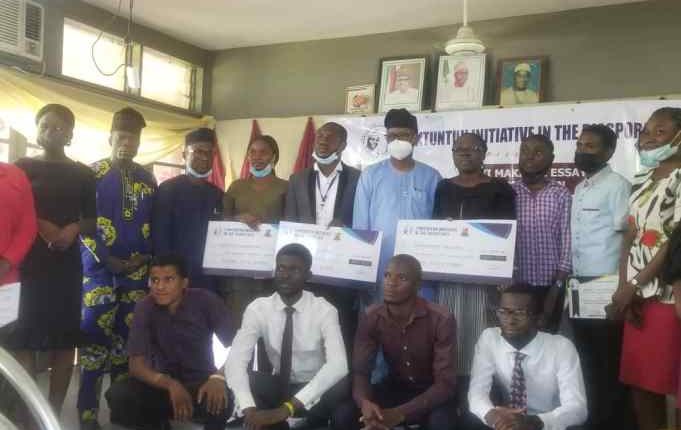 This was made known during its presentation of awards to the top 20 selected winners in an essay competition organised by the group tagged, “Seyi Makinde Essay Competition Award”, held at the Simeon Adebo Staff Development Center, Conference Hall, Ministry of Establishment and Training Building, Secretariat, Ibadan, Oyo State, on Monday.

The winners of the just concluded competition were rewarded with cash prizes, certificates, and a scholarship to one of the participants.

According to the group, the competition was organised for students in higher institutions of learning who reside in the state as well as an indigene of Oyo State to empower youths and test their intellectual capacity in some selected topics in the area of digital innovations in agriculture and the role of youths in governance.

Speaking at the event, Professor Sangodoyin charged the 20 finalists and the three winners of the competition to maximize their potentials as well as to key into the programmes in the education sector, which is the salient agenda of Governor Seyi Makinde-led administration.

“We are highly impressed with the outcome of the competition because even secondary school pupils also participated in the over 5000 entries and 20 made it to the final stage of which 1st, 2nd, and 3rd winners emerged,” he added.

Sangodoyin said: “OID is delighted on the success of Seyi Makinde Essay Competition which is earmarked as part of the activities marking the second anniversary of the Seyi Makinde-led government. This shows that the future of Oyo State is bright and we only need to push and encourage our young ones in order to have a knowledge-based economy.”

The OID Academy Coordinator, Dr Sophia Adeyeye also lauded Governor Makinde on the success he has recorded, especially in the area of education through various laudable policies gearing towards academic excellence in Oyo State.

She appreciated Governor Makinde for keeping his promises by appointing Commissioner for Youth, who is less than 30 years of age, and employing more than 5000 youths into Teaching Service Commission (TESCOM) as well as giving youths more opportunities in other government parastatals.

OID National Coordinator, Professor Olufemi Saibu, noted that over 20 percent of the budget allocated to the education sector is paying the dividends and encouraging the youths to support the administration in ensuring that the success story in Governor Makinde’s strive for effective and qualitative education within the two years in the office is achievable.

He affirmed that youths as future leaders and agents of change for innovation building if given favourable platform to showcase their academic excellence, skills and talents will perform incredibly well in any chosen field of human endeavour.

OID Women’s Coordinator, Dr Olasumbo Savage advised the female students to imbibe the culture of hard work, diligence, and dedication so as to excel in their chosen career, adding, “Be yourself and stand to be counted among the best.”

The group spokesperson, Mr Ayotomiwa Adebayo, in his remarks urged the youths and good people of Oyo State to support Governor Makinde in his efforts in transforming education and other key sectors in order to make the state an investment destination for investors.

The group prayed that God will grant Governor Makinde wisdom, guidance, and understanding to succeed in his efforts to make Oyo State great and prosperous.