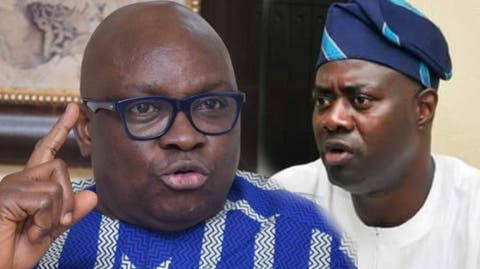 Seyi Makinde is Southwest Leader, No Doubt, But He Can’t Control What happens In States Chapter’s—Lare Olayinka

The Media Assistant to Ayodele Fayose, former Governor of Ekiti State, Lere Layinka has said that his principal is not contesting the leadership position of the People’s Democratic Party in the South-West region with the Oyo State Governor, Engineer Seyi Makinde but stated that the latter cannot dictate what will happen at the State chapters of the party in the region.

Responding to questions via the telephone on BOTTOM LINE on IBR 92.5fm Ibadan anchored by Aanuoluwapo Omorinde and monitored by our Correspondent, the Spokesman to ex-Governor Fayose insisted that the Lagos meeting called at the instance of his principal was to forge a path for the PDP in the region which he noted is ailing.

“Let me say this – nobody is disputing the fact that Governor Makinde is the Leader of the PDP in the South West but he cannot sit in Ibadan and be controlling the State chapters of the party in the zone”.

“It was this attitude that made our party to lose the governorship election few weeks back. Do not forget that this is a State that the PDP won with a landslide in 2019. We must get things right”.

“Imagine that the factional Chairman that Governor Makinde invited for his meeting in Ibadan is not recognized by the national Secretariat of the party”.

“If Adeleke had won the 2018 governorship election in Osun State will Governor Makinde still behave the way he is? Can he determine how the party will run in Osun State? Can he dictate to the Adebutus in Ogun State?” He asked.

According to Layinka, “many of those who were with Engineer Makinde before the election are no longer with him. They were at the meeting in Lagos and yet, you think that is not something”.

Reacting to an audio clip played on the programme where a Chieftain of the party, Chief Olabode George described an attempt to contest for the soul of the PDP in the South West with Governor Seyi Makinde as the an act of idiocy, Layinka said Chief George is known for such attitude.

“Who is Chief George to say all that? I heard him very well. Since he has been in charge of the PDP in Lagos State, what have we to show for it?”.

It would be recalled that the development in South-West PDP took a new twist when the Fayose faction appointed Femi Babalola popularly known as “Jogor” as the Chairman of the Reconciliation hours after a zonal caucus meeting held at the Oyo State Government House appointed former Governor of Osun State, Prince Olagunsoye Oyinlola to function in the same capacity.