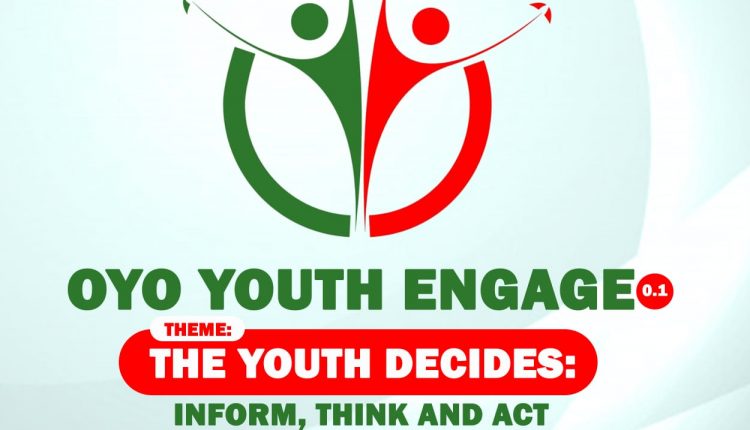 The commissioner for Youths and Sports Development Oyo State, Hon. Seun Fakorede has urged Youths in the state to be more involved in taking decision about their future. He made this remarks at the official unveiling of activities marking the maiden edition of the Oyo State PDP Youth summit.

Fakorede speaking on the theme for the program “The Youth Decides: Inform, Think & Act,” said “We need to take DECISION concerning our future, We need to be INFORMED, and there should always be critical THINKING before proceeding on any ACT. The commissioner also assure the youth of maximum cooperation between the government and the party in enhancing youth development in the state.

Hon. Dayo Ogungbenro, The People’s Democratic Party Chairman in Oyo state while speaking at the event held at the Party’s Secretariat Molete, noted that his political experiences and how he rose to the level of becoming a state party chairman today, is a reflection of how he has managed creditably well the responsibilities he was trusted with in the past. Speaking further said ” I am the father of every member of the party both aged, women and the youth, however I have special reservation for the youth because they’re the tool used in achieving political success”

He also reiterated that because the youths are active, agile and courageous, he further urged the youth to embrace and support anyone Amongst them who has been considered to either represent the party in the forthcoming election to achieve victory, he said the queue keeps moving and in a short while it could be your turn, he said.

Hon. Michael Ogunsina the Oyo state PDP Youth leader, while welcoming participants expressed his gratitude to the youths, noting that the youths summit is going to be the begining great things to come for youths in Oyo state. He asked that all hands be on deck to ensure that the youth plays a major role in the reelection of governor Seyi Makinde.

The program which was presided by the chairman of the organising Committee Prince Falana Adebowale, in his welcome speech appreciated all invited guests for honoring the invite despite being on a short notice, he equally thanked the leadership of the party and the youth leader himself for the creative thought of such initiative.

He noted further that “The youth constitute a large population of whatever political system anywhere and they are the deciding force with which democracy is premised, he said further that frequent dialogue and interaction amongst youth of the party will further boost peace and provide unity of purpose amongst us.”

Among dignitaries who attend the event included top youth appointees and elected officials of the state, the Commissioner for Youth and Sports, Hon. Seun Fakorede, The Special Assistant to the Governor on Youths and Sport, Hon. Kazeem Bolarinwa, The Special Adviser to Governor on project delivery, Hon. Abiodun Oluwaseun, Hon. Michael Ogunsina Oyo state Youth leader and other notable young members of the state house of Assembly who were elected on the platform of the party.

Also present is the Party’s Publicity Secretary Alhaji Akeem Olatunji, the Youth leader Michael Ogunsina who also doubled as the host of the event as well as youth leaders from various local government and leaders of various youth organisations in the state