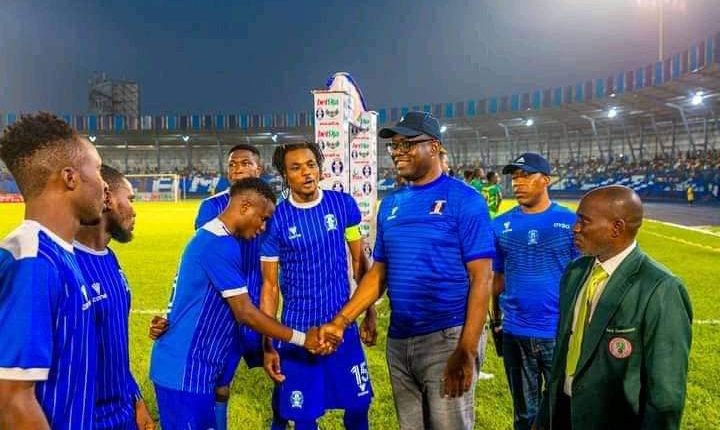 The governor was part of the crowd that watched the matchday 18 encounter of the Nigeria Professional Football League (NPFL), played on Sunday evening at the Lekan Salami Stadium.

The number one citizen of Oyo State, who was so excited watching the two sides battle it out under the flood lights, in company of other government functionaries and football stakeholders, gave the two teams the money, after the encounter.

The visibly happy Oyo state helmsman, expressed delight at seeing the atmosphere around the arena, even as he was happy with the progress of the Nigerian topflight.

Meanwhile, supporters and fans of the Oluyole Warriors, showered encomium on governor Makinde for sparing time to watch the team live.

They attributed the team’s victory, which puts an end to its winless streak to the governor’s presence, which they said brought luck to the team.

Recall that the Oluyole Warriors, only scored once in the first half prior to Sunday’s match, after Gafar Olafimihan:s opener from the spot during the matchday six encounter against Sunshine Stars of A kure, which ended in a 2-2 draw.

It will be recalled that the last time governor Makinde watched Shooting Stars’ league game live, also ended on a victorious note, as Chinedu Enuademu’s 87th minute goal gave the team a 1-0 win over Ekiti United in a matchday five tie of the botched 2019 NNL season.