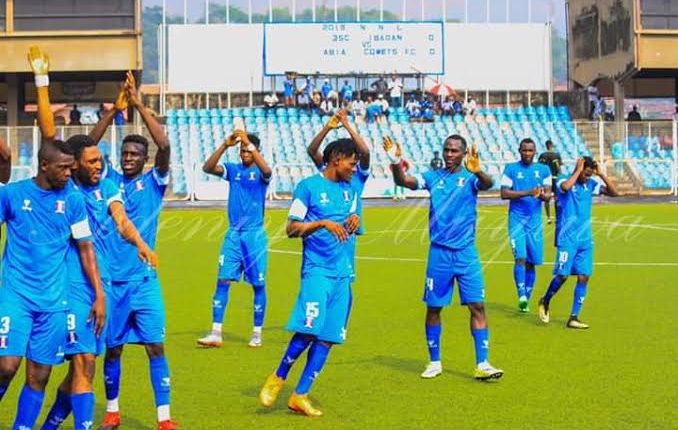 Both sides started the game cautiously and had to wait until the 22nd minute for the game’s first real chance when 3SC’s Osaghae Junior was left alone in the box for a free header but could only put his effort wide when it seemed easier to score.

That chance spurred on the Oluyole Boys and they quickly took control of the game, spraying passes around the pitch and keeping the home team pinned back. At this point, the home fans stepped up their support, cheering their team and booing the Oluyole Boys’ every touch and trying to will their team back into the game.

This support paid off and in the 38th minute 3SC ‘keeper, Charles Tambe had to be alert to keep out a wonderful Somtochukwu Abraham effort. Stung by the attempt, the Oluyole boys went on the offensive and almost scored but star striker Gafar Olafimihan’s effort was uncharacteristically poor.

Sensing their chance, the home team pressed forward and almost scored again with Number 32, Somtochukwu again missing a glorious chance. The referee blew the whistle soon after to send both teams to the dressing rooms still tied.

Soon after the second half started, 3SC striker, Gafar Olafimihan had to be taken off, and was replaced by another striker, Hyacinth Nwankegwu and Raheem Quadri came on for Adebayo Abayomi. Further emboldened by the loss of 3SC’s star man, Vandrezzer pushed up to engage the visiting side higher up the pitch.

By the 90th minute, it seemed as if both sides would have to share the points until substitute, Raheem Quadri popped up with the winning goal to send the visiting team wild with joy and condemn Vandrezzer new manager, Tony Bolus to a debut defeat.

Jobseekers: How To Write An Ideal CV