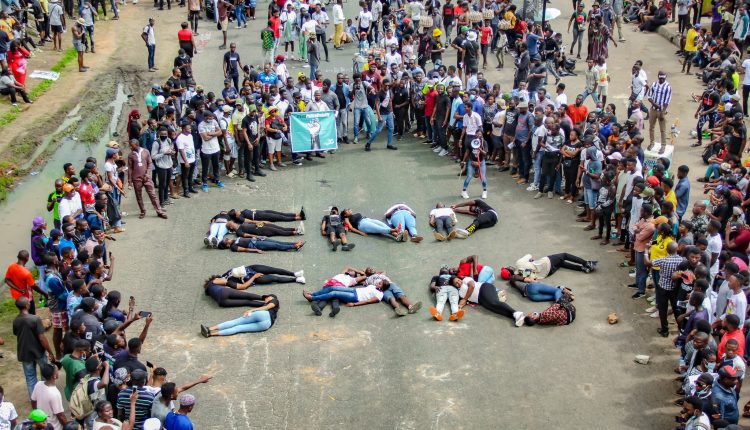 Sòrò Sókè And its Resounding Echoes into The Nigeria’s Political History|Williams F.

What a senseless and comical adventure! Both the villain and the hero have a common resemblance that makes it obvious that none has different things to offer. But as our custom is, we, in servile obedience applauded their senseless, diversionary and unwise comedy of errors that has not only attracted all and sundry at home, but has become the butt in the international communities.

Buoyed by the desire to see a change in the narrative, we Sòrò sókè (speak louder) against the menace of brutality, harassment and unjust killing by the operatives of Special Anti-Robbery Squad. Sòrò sókè has become a tool to speak forcefully but peacefully. The only tool for the actualization of Political emancipation.

After a long wait in silence, we saw the need to break the code of silence. Yes, we did. For a long time now, our thought have been caged in sheer cowardliness. We allowed our minds to be the fecund grounds for fruitless and selfish political journey of over sixty years led by oligarchic masquerading as democratic government. Without doubt, this oligarchic government lack the Political will to address the menace of police brutality, rights abuse and extortion, with a bird’s-eye view monitoring mechanism for over sixty years of its existence.

In staunch defense of Nigeria’s democratic system, Sòrò Sókè has also become a weapon to arouse revolutionary instill and fellow-feelings amidst the people. Particularly, the Nigerian Youths that have been befouled, wrongly profiled, harassed, brutalised and most often hunted down like chicks by the default Special Anti-Robbery Squad. Beyond that, Sòrò Sókè (Speak louder) has come to amplify the voice of voiceless Nigerian who are dying in abject poverty. Few years back, Nigeria, despite her enormous resources and man-power, was rated to be one of the most poorest country in the world. Assumably, before such claim can be published, there must have been a painstaking survey, research and scrutiny done and conducted by experts with long years of record-breaking achievements. But our leaders chide away from that. They faulted so obvious a claim! If it were truly a thoughtless and mendacious strategy to discredit the effort of the government, as claimed by our leaders, how could they possibly doctored the numbers of young Nigerians who sleeps under bridges and dilapidated building across the country? How can they accurately and successfully inflated the numbers of people who can’t afford two square meal per day?

As we begin to rewrite the history this nation through this peaceful agitation, there is a need to enunciate that a Silence from any person, or group of individuals at this crucial time in the history of our beloved country, particularly as it involves selfish less agitation for a radical overhauling, and comprehensive root and branch reformation of the country security architecture is not only regarded as anti-people, but as a scheming attempt to murder of our age-longed democratic practices. As Archbishop Desmond Tutu once opined,  “If you are neutral in situations of injustice, you have chosen the side of the oppressor.

If an elephant has its foot on the tail of a mouse and you say that you are neutral, the mouse will not appreciate your neutrality.” In the same vein, James Nachtwey wrote, ” I want my voice to become part of visual history, to enter our collective memory and our collective conscience. I hope it will serve to remind us that history’s deepest tragedies concern not the great protagonist who set the events in motion but the countless ordinary people who are caught up those events torn apart by their remorseless fury. I have been a witness, and these pictures are my testimony. The events I have recorded should not be forgotten and must not be repeated”. Obviously, Our concerted and collective voice is the reason why these horrible brutality, harassment, lawlessness and dereliction of duty in the part of Security officers should it not repeat itself. We have more than enough evidence. About fifty two unsung heroes and heroine have been murdered unjustly at the prime of their youth, who knows the next victim?

One will begin to ask what exactly is the usefulness of silent in the face of tyranny and injustice? More than ever, this generation has suffered a lot more than to keep silent. Have you taught of millions of out-of-school children in this country? You might probably have seen many labour force begging for alms along motorways when they supposed to be engaged. What of the scourge of unemployment? Thousands of graduates are trooping out into the uncertain future. Upon all this, Security personnel decided to do a showmanship and expertise by spilling the blood of innocent Youth Nigerians on the street, roads, and highways.

To Mention a few, one young, about being certified electrical apprentice, Jimoh Isaq was slayed by the stray bullets of nonchallant officer during a protest at Ogbomosho against the background of excessive use of force, brutality by the operatives of the default Special Anti-Robbery Squad. Likewise, the family of Sleek has not recover from the rude shock his untimely death caused to them.

We have been living in the absolute pretense with the hope that the polity would be rejigged soon, but as soonest said, not soonest mended.

To state the obvious, a notable reason why this Political quagmire had a long stay in this country is our approach to our religious mentality. No doubt, none of the religious practices we have in Nigeria promote violence. But we have come to understand that protest is not violence as seen by many. It is mere fabric of responsive democratic setting. It must be divorced from religious beliefs. Over time, Young Nigerians have been stuck in the mood of religious thought that God will fight for them, and so, this widest figment of hyperactive imagination reigned in the mind of the people for long.

Our inability to clearly spell out religious beliefs from a political activism that is clearly earthly and humanly made us suspend our brain our common sense and believe God will fight for us. “The battle is of the Lord”. That’s our common saying till few oligarchy strip off this country of They forgot that even religious emancipation can only be achieved after Political emancipation. The registered voices of men like Martin’s Luther King Jnr, Jefferson Bowen paved way for the religious emancipation from the shackles of Catholicism era. Or, maybe we should agree that Aisha Yesufu is not a true Muslim.

Apart from the point discussed above, one thing that contributed to our suffering is being scared to speak. Inside any average Nigerian lies a lot of untold, high-handed experience to tell. But the system has colored us with their idea that our voice doesn’t matter. Gaton Bachelard in his famous word said “What is the source of our first suffering? It lies in the fact that we hesitated to speak. It was born in the moment when we accumulated silent things within us.” This is the sole reason why you need to tell your neighbor, acquaintances, members of your family to speak now! Else they become the next victims.