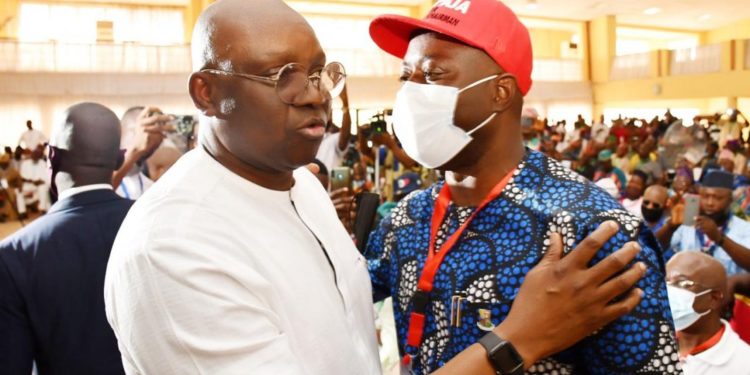 For the first time in 21 years, the Peoples’ Democratic Party (PDP) in Southwest held a hotly contested zonal congress last week, which settled months of muscle-flexing. Southwest Bureau Chief BISI OLADELE, who covered the election, examines the challenges of reconciliation that lie ahead for Governor Seyi Makinde, who is the leader of the party in the region, to unite the party for future elections
After a hotly contested Southwest regional congress, Oyo State Governor Seyi Makinde now has the huge task of reconciling all aggrieved chieftains. Since the Peoples’ Democratic Party (PDP) was established in 1998, positions in the zonal executive were always amicably shared among the states for equal representation and power balancing. But current leaders of the party across the six Southwest states of Osun, Oyo, Ogun, Lagos, Ondo and Ekiti threw amity into the dustbin this time and went for a bitter election in Osogbo, the Osun State capital last week Monday. The election has redefined the power structure within the party in the region.

The choice of the election was informed by irreconcilable differences between the two major factions in the zone. A faction is led by Governor Makinde and the other led by former Ekiti State Governor Ayodele Fayose. Both leaders refused to shift ground, thereby necessitating an election to determine the faction that will control the party. In the end, the Fayose faction was floored, but albeit narrowly. Makinde’s candidate Taofeek Arapaja polled 343 votes to beat Fayose’s candidate, Eddy Olafeso who polled 330 votes. Though the election has shown where power belongs in the region, it only determined who holds sway, not how the party can perform in a future election. The election can plummet the fortunes of the PDP in the Southwest if the fall-out of the congress is not properly managed. This is a huge task for Governor Makinde in the coming months.

The rift was made public by Fayose last year when he criticised how Makinde has been handling the affairs of the party. He accused the governor of meddling in the affairs of the party in other states in the region, saying it was a wrong way to lead. He insisted that rather than find an acceptable common ground between his faction in Ekiti and that of Sen. Olujinmi then, Makinde supported Olujinmi. The cantankerous former governor pledged that he would fight Makinde to finish, stressing that he was more experienced in politics. The rift continued until early this year when party leaders, including former Osun State governor, Olagunsoye Oyinlola, intervened. Former Senate President Bukola Saraki also intervened to no avail. Fayose insisted that the PDP in the zone should not be run by a one-man leadership, suggesting that Makinde was not involving other leaders in decision-making. The inability to resolve their differences led to the election held at Osogbo, a venue regarded as neutral for both parties.

The party was split in the middle in four of the six states in the region. The exceptions are in Oyo where only a handful of leaders is opposed to Makinde and Ekiti where they are now united.

Though Makinde said in his pre-voting speech that the election was meant to produce the best candidates for the party, it was clear that both factions went to Osogbo to take over the soul of the party and ridicule the faction that loses. But the reality of losing dawned on both sides just a few minutes before the voting exercise commenced. It became clear to both gladiators that one must lose, and that it could be either, irrespective of the grand plan and underground perfection of strategies.

For this purpose, and to stave off post-election violence, both leaders were conciliatory when they addressed the delegates. Makinde told the delegates: “This is a family affair. It is an attempt to reposition our party in the Southwest. It has implications for our party nationally. Whatever the outcome is, we will take it in the spirit of a family contest. We don’t want to defeat ourselves, we want to defeat the All Progressives Congress (APC).

“At the end of this exercise, there will be no victor, no vanquished. As the only governor of the party in the zone, whoever emerges, I will work with them to reposition the party. I thank you for the peaceful conduct.”

Fayose also said: “Governor Seyi Makinde is our leader. Our supporters and lovers should not continue to put a wedge in between us. Either way, this election goes, I will accept. Even though Arapaja has abused me so much, I will be the first person to visit him in Ibadan. Nobody has offended me and if I have offended anybody, I sincerely apologize. Seyi Makinde remains our father, come what may.”

Their disposition somehow lowered the tension in the hall. It also accounts for the reason members of Makinde’s faction did not go on a high celebration spree. They have realised that they need each other for the party to achieve its goal in the region.

Makinde and his followers cannot afford to gloat over their narrow victory because the faction alone is not strong enough to win an election in the states. The case of the October 10, 2020 governorship election in Ondo State offers an example. Members of the Fayose faction in the state claimed that they were not involved in the campaign and other election processes by the party’s governorship candidate Eyitayo Jegede, who is in Makinde’s faction. APC won the election.

It is noteworthy that the only grouse of the Fayose faction was that they were not consulted or carried along in decision-making. But, it is not clear, if the situation is so because they were asking for too much or because of the exaggerated image of their importance. Whatever the case, they must have learnt a bitter lesson with their loss at the congress.

As is now the case in Ekiti, the winners are expected to reach out to the losers in the remaining five states in a genuine attempt to build a bigger and stronger PDP in Southwest. The congress has revealed the strength and limitation of each faction, a development that should pave way for a realistic estimate of themselves.

To achieve this, Makinde and other leaders need to stoop to conquer, while the losers should also humble themselves to embrace genuine reconciliation. A sign can be read in the congratulatory message of the Oyo State chapter for Arapaja and his executive members.

The message by the State Publicity Secretary Akeem Olatunji read in part: “ As the ruling party in Oyo State under the able leadership of our ‘Mr Talk and Do’ governor, Engr Seyi Makinde, we are not unmindful of the fact that as members of one large family, there are some of our brothers and sisters with grievances but with such loud statement made by our leaders, Ayo Fayose and Governor Seyi Makinde at the congress in Osogbo, we are undoubtedly on the path of genuine reconciliation and rebuilding.

“We, therefore, urge our party members who may be aggrieved for whatever reasons to sheath their sword and join hands with Governor Makinde and Amb Arapaja to rebuild and reposition our great party for greater electoral success in future.”

In Oyo State, members of the opposing group led by Engr. Femi Babalola and Adebisi Olopoeniyan should be ready to embrace the governor once he waves the olive branch. They are in the minority, though not insignificant. The same applies to Ondo where the Fayose faction is, however, stronger.

In Osun State, Makinde is expected to prevail on the two factions to drop litigations and embrace reconciliation. Only a united party can win the election which will hold next year. Makinde should call leaders of the two factions to the table and make them realize that individualism will continue to leave the party in opposition.

In Ogun, emerging signs show that more members are coming together after the sad death of Buruji Kashamu, who was a major financier of a faction until his death. Makinde is expected to reach out to Hon. Ladi Adebutu and other leaders and persuade them to close ranks.

Makinde has more work to do in Lagos PDP which has remained factionalized for so many years.

Except these reconciliation moves are genuinely made, the PDP may remain far from power in the zone in the coming elections.