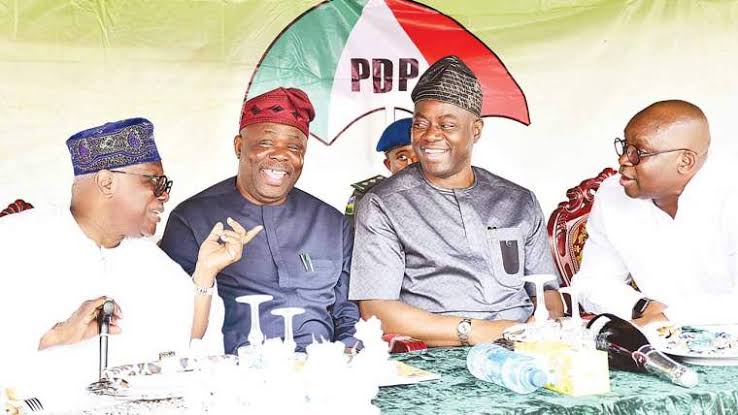 The defeat of Eddy Olafeso by former deputy governor, Taofeek Arapaja at the just concluded congress of the Peoples Democratic Party in Southwest in narrow than observers think it is, details about the event has shown.

According to Nigerian Tribune, as delegates cast their ballots, leaders of the two camps were still seen making calculations of what they expected to poll from each of the six states.

As the count continued, people took pens and paper, while others used calculator on their phones to do their own estimate of the result. Just before the counting of ballots, there was some frenzy in the hall as sounds of gunshots, suspected to be from thugs, were heard outside the event venue.

However, the frenzy and tension was substituted with euphoria when Taofeek Arapaja was announced winner with 343 votes as against 330 votes polled by his challenger, Eddy Olafeso. It was a clean sweep for the Arapaja side with all its candidates for the various positions emerging victorious.

This was a battle for the soul of the party. Shortly before the election, chairman of the Electoral/Congress committee, Benson Abounu had given room for speeches from the two main gladiators in the exercise, Makinde and Fayose. Speaking, Makinde expressed confidence that the exercise would not tear the party, emphasizing that he was hell bent on repositioning the party ahead the 2023. “We don’t want to defeat ourselves; we want to defeat the All Progressives Congress (APC). I promise you all that at the end of this election, there will be no victor, not vanquished. As your only governor in this zone, whoever emerges belongs to me. And I will work with the team to reposition our party,” Makinde said.

At the end of Makinde’s speech, Fayose, was not yet in the hall. Not long after, however, he entered the auditorium with shouts of ‘Oshokomole.’ As Fayose walked up the rostrum, many wondered what words he would profess. First, he walked down to embrace Makinde and they both muttered words into each other’s ears. After saluting some leaders of the party in attendance, Fayose said, “This congress must not divide us. If I have offended anybody, I apologise. Seyi Makinde and I are one. The burning issue in PDP is circumstantial. Who is our leader? Seyi Makinde is our leader. Prince Olagunsoye Oyinlola is our leader. Segun Oni is our leader and whatever the outcome of the elections may be, I will accept it in a good manner.”

For several observers, the election turnout shows that the PDP leadership in the South West cannot afford to belittle the importance of former governor Fayose for its good fortune in the coming general election. The observers note that Fayose has proven his mettle with his candidate Eddy Olafeso losing by a narrow margin, despite not being able to command as much resources to mobilise as much as a sitting governor, Seyi Makinde.

With the Arapaja camp claiming all the 22 positions, it waits to be seen what form of compromise will be done to accommodate the Olafeso/Fayose camp. The implication of the result is that the party could get further polarized or compromise to unite. Though the congress has been won and lost issues of peace, reconciliation, and progress of the party ahead the 2023 general election are germane. With the All Progressives Congress (APC) and other political parties also seeking to swell its fold and accommodate aggrieved PDP members, will the PDP be quick, sincere, fair in peace and reconciliation of members? It also waits to be seen how the new zonal leadership accommodates members known to be on the Olafeso side.

It is a known fact that there are factions and aggrieved members of the PDP in all six states of the South West and the affirmed leader of the party, Governor Seyi Makinde and the zonal Chairman, Taofeek Arapaja has his work well cut-out. The forthcoming elections will show acceptability of Makinde’s and Arapaja’s leadership of the South West.

Makinde did note that rather than internal wrangling within the PDP, the battle should be against the APC. Makinde said, “This is a family affair. It is an attempt to reposition our party in the South West. It has ramifications for our party nationally so whatever the outcome is, we will take it in spirit of a family contest. We don’t want to defeat ourselves, we want to defeat APC. So at the end of this exercise, I promise there will be no victor, no vanquished. As your only governor in this zone, whoever emerges, belongs to me and I will work with the team to reposition our party in the South West.”

Fayose: Makinde Quiet But Deadly, I Came To Congress Venue After Watching Auxilliary’s Video Threatening To Kill Me