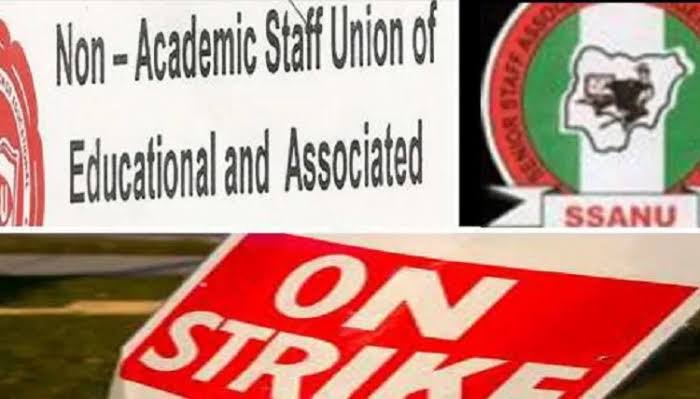 The Senior Staff Association of Nigerian Universities (SSANU) and the Non-Academic Staff Union (NASU) of Education and Associated Institutions on Friday, extended their warning strike by two weeks.

This was contained in a circular obtained by newsmen on Friday and signed by SSANU President, Mohammed Ibrahim, and NASU General Secretary, Peters Adeyemi.

Recall that the non-academic workers had commenced a two-week warning strike on March 27, over the inability of the federal government to meet their demands.

The extension of the strike addressed to branch chairmen of NASU and SSANU in universities and inter-university centres was titled, ‘Re: Commencement of two-week warning strike’.

Part of the circular reads, “Deriving from the failure of the Federal Government to act positively on the on-going warning strike, JAC hereby directs members to continue with the warning strike for another two weeks, hoping that within the period, the government will be in a position to address these issues.

“However, if the present situation persists members of NASU and SSANU will be adequately informed about the next line of action, before the expiration of the additional two weeks.

“The meeting observed that the Federal Government has not deemed it fit to invite the JAC of NASU and SSANU to a meeting since the struggle started and also took note of the media statement credited to the representative of the government, Dr Chris Ngige, the Honourable Minister of Labour and Employment on the application of ‘No Work No Pay policy to our members.

“The meeting, therefore, resolved that the issues in contention are not new and JAC has followed due process and fulfilled all necessary conditions precedent before commencing the strike.

“In view of this, all branches of NASU and SSANU are hereby directed to hold congresses on Monday, 11th of April, 2022 and take resolutions on the ongoing strike.

“The outcome of the resolutions should be forwarded to your respective Union Headquarters immediately for collation”, the circular added.

Meanwhile, the Academic Staff Union of Universities (ASUU) has on the 53rd day of its strike called on well-meaning Nigerians to intervene in the ongoing face-off between the union and the Federal Government.

The Nsukka Zonal Coordinator of ASUU, Rapheal Amokaha made the call at a press conference held in Lokoja.

He accused the Federal Government of paying lip service to the payroll issues which have formed a major part of ASUU’s agitations.

Amokaha said the government is yet to demonstrate any meaningful seriousness in addressing the demands of the academics.

Wife of Eze Ndigbo of Ibadanland, Betsy Anozie Dies at 67