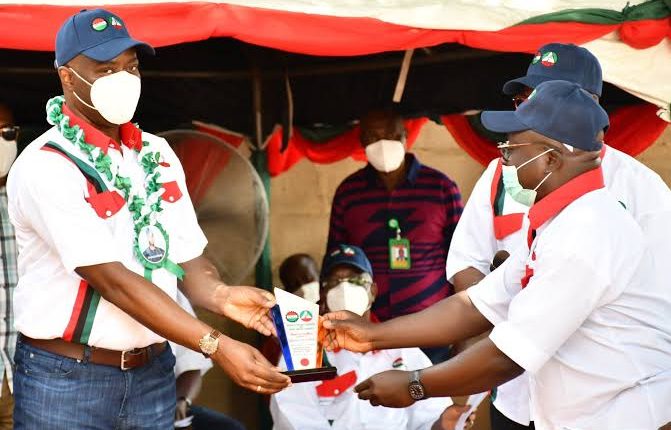 Staff Audit: Aggrieved Workers Who Sued Makinde Are On Their Own – Oyo NLC

Speaking on behalf of the Organized Labour in the state, the Oyo State Chairman of the Nigeria Labour Congress, Comrade Kayode Martins, made this known on Saturday, July 24, while featuring on a live radio program in Ibadan, and monitored by Sunrisebulletin.com

Comrade Martins said the leadership of the Congress in Oyo state has no connection with the court case some workers who voluntarily or were retired from the Oyo State Civil Service over infractions in their documents have instituted against the State government saying they are on their own.

Last week, it was reported that the Oyo State Government, after it received a recommendation by the Implementation Committee of Oyo State 2019/2020 Civil/Public Servants Audit and Payroll Re-engineering/Validation Exercise, affirmed the removal of 41 staffs classified as ‘ghost workers’.

According to the earlier report, the Consultants, Messrs Sally Tilbot, indicted 602 Officers and recommended them for removal from the payrolls but the Implementation Committee affirmed 41 as ghost workers while 40 others were cleared of any infractions.

The Implementation Committee also affirmed 170 Officers engaged in systematic retirements while affirming the option of voluntary retirement by 341 others with irregular records of service.

However, some of the affected workers who became aggrieved has approached the Court to seek redress over what was perceived as unjust on the part of the state government towards them.

The leadership of the NLC Oyo State chapter has however disconnected itself from the court case being instituted against the state government by these aggrieved retired workers.

“No! we don’t know anything about that. It all started in 2019 when the State government employed the service of a Consultant to carry out the staff audit exercise.

“I was then Vice Chairman of our Union then and was part of the Committee at that time but later pulled out because of the way the Consultant treated some of our Workers.

“We lodged a complaint with the State government but we were assured that justice will prevail and so, we should allow her (the Consultant) do her job.

“After the verification exercise, 601 people were recommended for sanction. We picked it up from there. We went in search of these people.

“We asked from all the heads of ministries, departments and agencies to know who these ones are and after all that, 41 people did not show up. These are the ghost workers.

“Maybe some of them have travelled out without informing anyone or something.” Comrade Martins explained.

When asked if the leadership of the Organized Labour in the State agrees with the decision of the State government, the NLC boss replied by asking “what else could be done when they did not show up.”

Comrade Martins who described the option of voluntary retirement given some of the affected workers as a ‘soft-landing’ queried why some of them have chosen to approach the Court without informing the NLC leadership in the State while faulting the move.

On why the NLC leadership in Oyo state supported the move by the Seyi Makinde led administration whereas the Organized Labour kicked against similar action in 2016 during the last administration, Martins responded by saying there is a huge difference in what is happening now and what has happened.

According to him “what the Ajimobi government did then was totally different from what this government has done.
Then, if there is a mistake of an alphabet in your name, you are gone.

“If you came into the service unmarried and then afterwards you get married, hopefully, your name will change.
Then, you are gone.

“There was room for dialogue. In fact, the government then did not follow due process.”

Comrade Martins however, dismissed the insinuation that Governor Seyi Makinde is pampering Workers at the detriment of others in the state.