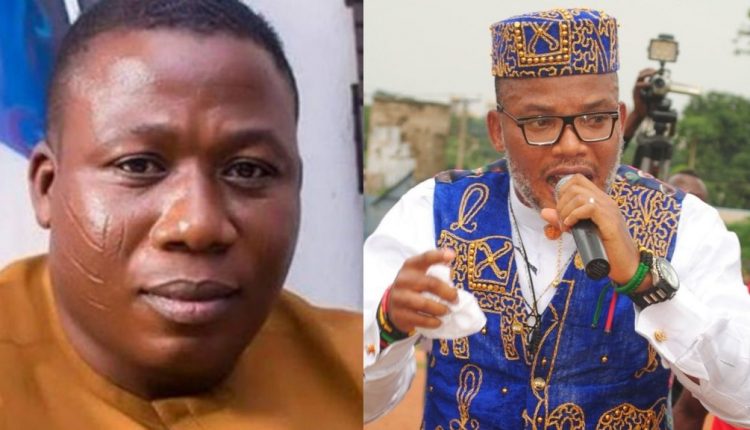 Reactions have continued to trail the recent moves by the Federal Government to cripple agitationd for secession in the Southeast and Southwestern parts of the country.

Akéde Ọ̀yọ́ recalls that Mazi Nnamdi Kanu, leader of the Southeast secessionist group, the Indigenous People of Biafra, IPOB, was rearrested from an undisclosed country to continue his trial in the country after jumping bail in 2017.

Kanu who holds a dual citizen of both British and Nigeria, is currently being remanded in the custody of the Department of State Service (DSS).

According to the Minister of Information and Culture, Mr Lai Mohammed who addressed newsmen on Thursday, the fugitive was re-arrested following the efforts of the Nigerian Security and Intelligence Agencies in collaboration with authorities of other countries.

FG arrested Kanu with the aim of ending the rising agitations for the actualization of Biafra, an agitated sovereign nation for the Southeastern people (Igbos).

Similarly, the DSS on Wednesday night stormed the residence of a Yoruba activist, the major pioneer of the Yoruba nation (Oduduwa) in Ibadan, the Oyo State capital where about two of his allies were gunned down.

Igboho who had successfully conducted the Yoruba nation’s rally in some states in the Southwest, had prior to the invasion of his residence by DSS, scheduled a mega rally in Lagos State on Saturday, July 3rd.

Spokesman of the service, Peter Afunanya, while declaring the secessionist wanted during a press briefing on Thursday night, also paraded no fewer than 12 suspects arrested during the operation.

But some Nigerians who reacted to the developments were sceptical on why the security agencies are clamping down on ‘innocent’ agitators while “terrorist sympathisers” particularly Ahmed Gumi and the Miyetti Allah are allowed to go free despite indications of ties with bandits and other criminals. Others, however, are of the views that the agitators have overstretched the limits in their actions and utterances.

A Facebook user, Miracle Brave who took to his page to express disappointment on the development alleged that the president is more of a “destroyer than a Messiah,” as he was believed to be.

He said, “Kanu is advocating for the freedom of Biafra (the creation of the state of Biafra for the South East and South-South).

“Igboho is advocating for the safety of his people in the Sout West against the menace of Fulani Herdsmen. He also calls for the creation of the Oduduwa Nation.

“Gumi is advocating for bandits who have been kidnapping students and other citizens in the North. The bandits have also been killing and destroying lives and property.

“Those in the Southern parts are being arrested and declared wanted for championing courses while the bandits in the North and their leader despite being rebellious without a reasonable course are being pampered and treated well.

“Is this the (rtd) Major General Muhammadu Buhari we were told would be the messiah of Nigeria if we elect him to be our President?

“How come he’s now being more of a destroyer than a Messiah? Definitely, we’ve been caught up! Thank goodness I never believed in the so-called messiah from the onset and have never cast my vote for him. Those who did should start apologizing to Nigerians now”.

Another user, Marley Otsayi said, “Sheikh Gumi knows the unknown gunmen but no security agent has ransacked his house yet or even questioned him. What a country!

“Meanwhile, somewhere in the North they turn up for meetings with AK-47”.

Comr Onogwu Peter in his page said, “In my country, once you become a threat to government in favour of the innocent citizens, boom they will set you up for the best reason known to them”.

“Leave Igboho and face the terror sympathisers and enablers.

Also, in a chat with DAILY POST, a legal practitioner, Barrister John Odeigwu alleged that the president has a hidden agenda for sparing Gumi and the Miyetti Allah.

“This Miyetti Allah have never been invited by any security agency despite their terrorist activities across the country. This may be because it has to do Fulani.

“The other one that is always meeting and advocating for bandits in the North has been allowed to move freely because he is also a Northerner. So it is obvious that the battle is against the South,” he said.

But a veteran journalist who does not want her name mentioned is of the opinion that Igboho and Nnamdi Kanu went too far in their agitations for self-determination. According to her, you can still be peaceful in your agitation both in action and utterances, yet achieve your goals.

Updated: Sunday Igboho Debunks Arrest By DSS (Listen To Him)