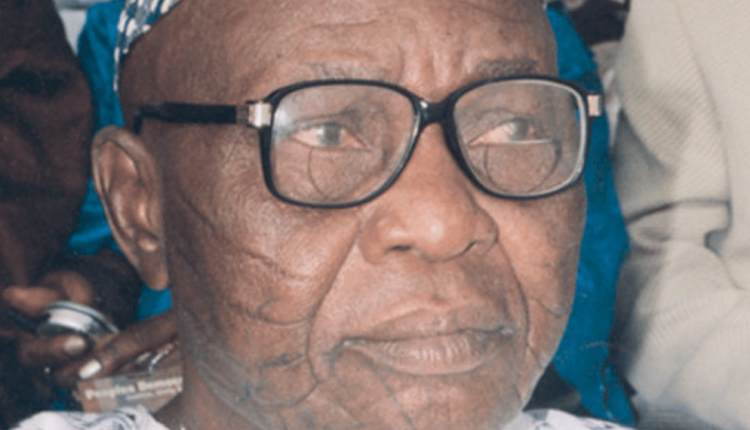 On Wednesday, a corpse materialized at the entrance of the Oyo State Government Secretariat, Agodi. It was a corpse dressed in the regalia of protest. Yet the corpse reminds me that in Ibadan, the ghost of Lamidi Adedibu still hovers above the skies, spreading its wings across the firmament. The old fox already left, but he won’t let go of his tight grip on Oyo politics and governance space. Lamidi died thirteen years ago as the acclaimed ‘strongman’ of Ibadan politics, but his ghost haunts this city of brown rusted roofs, still.

First off, at the congress organized by the Adebisi Olopo-Eniyan faction of the PDP at Jogor Centre the other day, it was a macabre dance of guns, dagger, and bullets. By the time the dust settled, some itchy fingers and broken bottles had, reportedly, produced a broken limb and some bullet-riddled vehicles. At the other PDP (factional) congress organized by Governor Seyi Makinde and his allies at the Adamasingba Stadium, it was a peaceful festival of gongs, laughter, Amala and Gbegiri. But it was the sort of peace procured with the currency of the freedom of the ‘other’. As Jean-Paul Sartre said, anyway, hell is other people.

Within the Oyo APC, there is an ominous stalemate. Party stalwarts, elders and young men whose tall ambitions have been cut short are smarting from the specter of what’s now known as ‘Jagba’-ism. It’s the fear of politicians that take without necessarily being asked to take. Ja-gba. It’s political violence and mayhem launched without noise, without bloodshed, but with dirty gambits and subterfuge. Ja-gba. It’s to take things by force without necessarily being forceful.

The man reportedly at the center of the spectacle, Senator Teslim Folarin, is a prominent disciple of Lamidi Adedibu—-just like Adebayo Alao-Akala, another latter-day progressive whom Adedibu literally made Oyo’s numero uno. Folarin it was who was chauffeured from the UK to Molete in the early 2000s, serenaded us with cute British diction on his way to the upper chamber in Abuja in 2003, tacitly supported Rashidi Ladoja’s lawless impeachment by a band of brigands in 2006, was enmeshed in a supremacy battle with Alao-Akala in 2011, hobnobbed with the late Abiola Ajimobi in 2015 and 2019, and now schemes ahead of 2023.

And so in the most interesting of places, right at the backyard of Oyo ‘progressives’, Lamidi Adedibu re-appears yet again, unperturbed by the cacophony of voices screaming in rejection and disapproval.

But to be sure, Adedibu (or/and his doppelganger) isn’t a stranger in the ‘progressive’ fold.

In his most authoritative book, What I Saw in the Politics and Chieftaincy Affairs of Ibadanland, Adedibu narrated how, in a fit of rage, he almost broke down the gate of Mapo Hall one sunny afternoon in the 1950s. It was a protest against what he considered Adegoke Adelabu’s tyranny. At the time, Adedibu was a progressive, but he didn’t care much about what was considered the core of progressivism: character. Of course the great Awo frowned at Adedibu’s thuggish stunt, but as events of the years afterwards show, the late sage could not tame the beast in the old man.

Adedibu died a master tactician through and through. By a dint of hard work and sheer thuggery, of course with the generous support of the government at the centre, led by Olusegun Obasanjo, he built quite the reputation for himself in political chicanery and commoditization of electoral violence. To him, the end is all that mattered, however obscene the means appeared. And since politics is a game of results, it worked quite fine.

By the time he breathed his last, he had made a governor of a mere chairmanship aspirant, a deputy governor of an alleged vulcanizer, a senator of a carpenter, a Reps member of a motor boy—-all through the instrumentality of force and subterfuge. But in fairness to the man, Adedibu’s was one political tactic that was, er, ‘violently democratic’: he had his bait in covert weaponization of the people’s poverty, through his Friday-Friday festival of Amala and Gbegiri, and occasional Ankara clothing materials distributed in Molete, with some wads of naira notes. In a way, aside the instrumentality of force, he actually schemed and toiled to earn the trust of the hoi polloi, the support of whom he traded among the bourgeoisie for influence and cash. That’s why his Molete home was a Mecca of sort to all politicians from across Nigeria, both the refined and the lousy, even though the once bubbling edifice now lies lifelessly like a tired drunkard.

So the man whom Awo prevented from breaking down the gate of Mapo Hall in the 1950s would come around to pull up even bigger stunts: he would tear down heftier gates at the Agodi Government House by proxy, scheme for the violent displacement of an elected governor, make a mess of the state legislative arm, empower thugs and Oraisas who in turn became a law unto themselves, and whimsically decide the destiny of a whole state in his bedroom.

When Adedibu died in 2008, half of Ibadan residents who had had enough of the perennial brigandage burst into bitter-sweet dirges. Others, for whom he was a god, wept into the nights. His death was tragedy as harbinger of tragi-comedy. But twelve years on, Adedibu died as though he didn’t die, and his ghost haunts.

The corpse at the Agodi Secretariat earlier in the week was Damilare Ojo’s, a motorcyclist allegedly killed at Queen Cinema due to a disagreement over N100. The young man, or so said the angry crowd of Okada riders that brought him there, was murdered by marauding boys of the Oyo State Park Management System (PMS). The PMS boys are notorious for extortion, harassment, and violence. In recent months, they have graduated into a murderous mob. But folks see these things as though they don’t see them. It’s the sort of hypocrisy that fails, fabulously so, to hide its intent. Hush.

Earlier in June or so, the PMS boys struck at Iwo Road phone mart, allegedly leaving in their trail sorrows, tears, and blood. But theirs isn’t any surprising metamorphosis, given the antecedent of their numero uno: Lamidi Auxiliary a.k.a Baba Rili of the Wulo-Wubo fame.

In August, I ran into the Wulo-Wubo convoy at Olodo, enroute to Iyana Church. In split seconds, some weird-looking hemp smokers chased us all off the road, leaving in their trail violent gymnastics and marijuana smoke. It was a script pulled out of the locust years of brigandage. Hush.

But again, it was no surprise after all. Auxiliary it was who was locked in a mortal combat with the late Lati Elewe-Omo, who, also by some design, had had some engagements with the relic, Akinsola Tokyo. Tokyo it was who worked for Ajimobi’s 2011 mandate and, for eons, had struggled for space and influence with Tawa, another expired article.

They all are now artifacts of (better forgotten) history.

Yet between Auxiliary and Elewe-Omo, between Tokyo and Tawa, including even Fele Taofiki, there is a long list of bejeweled thugs ( Concord, Egbeda Tunnila, Gala, Alado, Ismail Agbaje, Alhaji Bola) who owe their notoriety and invincibility to Lamidi Adedibu, who in turn owed his to the conspiratorial support he enjoyed from the state. In a sense, Lamidi Adedibu has left the scene but his legacy endures in these boys, most notably now Auxiliary, an ally of the meek-looking Governor Makinde, who in turn is a political ally of Lamidi Adedibu’s wife who’s often too quick to brag that she is the governor’s ‘godmother’, Bose Adedibu.

So head or tail, APC or PDP, Wulo-Wubo or Jagba, Lamidi Adedibu’s ghost haunts Oyo, still. Only that this time, it’s a top secret that isn’t secretive. Hush.