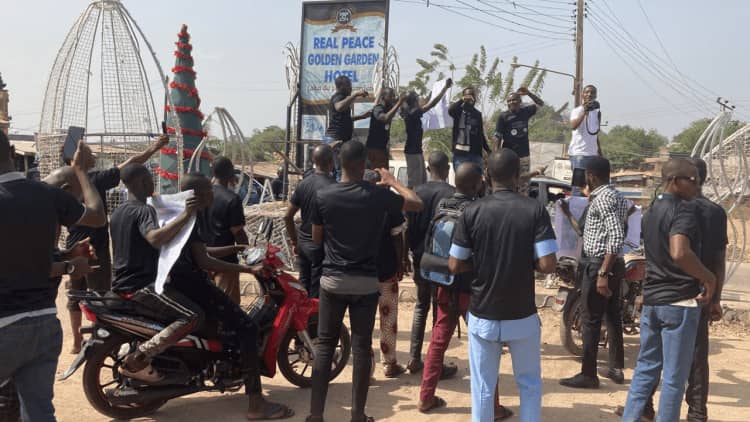 The youths of Ibarapa East local government area of Oyo state alongside some family members of Timothy Adegoke, took to the streets on monday, to protest delayed prosecution, of the suspects who killed their kinsman.

Recall that Timothy Adegoke was the Masters student of the Obafemi Awolowo University, who was reportedly killed at Hillton Hotel in Ile-Ife, Osun state, a hotel belonging to one Adedoyin Abdulrahman.

Mr. Adegoke had traveled to Ile-Ife to write an examination. He lodged in the hotel on November 5, but his corpse was found days later, reportedly exhumed beside the hotel.

Meanwhile, the police in Osun state had confirmed the arrest of Mr. Abdulrahman and five other suspects in relation to the murder.

The youths from the deceased’s home town of Ikolaba area in Oyo state, who staged a peaceful protest to demand justice for Adegoke, were seen carrying placards and singing solidarity songs.

Speaking with newsmen, the elder brother of the deceased, Olugbade Adegoke said, “The family wants a thorough investigation of the case, as well as immediate closure of the hotel.

“We are demanding for justice. All the youths in Ikolaba are demanding justice. I am glad the investigation has been done. I went to Abuja three days ago and I was told to go and prepare for court, that Adedoyin would be charged,” he added.

Ibrahim Adams, who spoke on behalf of the youths, noted that the protest would gradually move from Oyo state to every other state of the Southwest, if justice is not served on the matter.

“Our brother was killed and all we are demanding is justice, are we asking for too much? For now we still have believe in the handling of the IGP and we know that justice will be served.

“We won’t mind taking this protest to every other parts of the southwest, if we notice any form of foul play in this very matter”, he concluded.