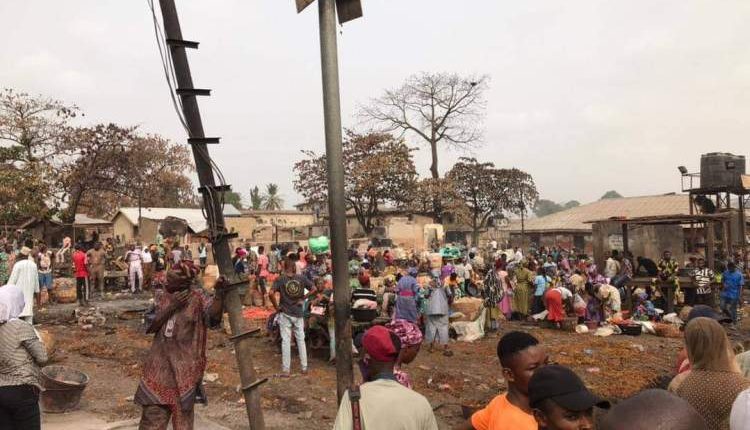 Market activities at the Shasha market, Ibadan, following Governor Seyi Makinde’s order on the reopening of the market on Tuesday.

During a meeting with the leaders of the two warring communities at the House of Chiefs, Secretariat, Agodi, Ibadan on Tuesday, Governor Makinde ordered the reopening of the market due to the economic situation and the peculiarities associated with the state.

On Wednesday, shop owners, buyers and sellers flock the market for normal activities. Though the market was not clogged as usual, there was the typical offloading of trucks of tomatoes, pepper, onions and its subsequent sale to wholesalers and retailers.

While those with plank space sold their well-arranged bags of tomatoes, pepper, onions, those with burnt shops, without plank space, were seen in clusters sulking over their losses in the Shasha crisis, according to a report by Nigerian Tribune.

According to the report, while business went on in the middle of the market, shop owners and some hired labourers were seen in some burnt shops leveling, gathering and clearing debris of burnt goods.

Some who came to purchase goods said there were few porters than normal, noting that they had to pay extra or themselves carry their goods on their heads for loading into vehicles.

There was appreciable security presence outside and around the market with security personnel also seen patrolling inside the market.

Meanwhile, traders have said the typical boisterous nature of trading activities at Shasha will only return if the state government enforces a closure of Iroko market.

They held that some of their fellow traders which had relocated were still trading at Iroko.

They also urged Governor Seyi Makinde to fulfill his promise to get bulldozer to clear the debris generated due to the violence, fix solar light and ensure constant security presence at the market. Various traders also prayed that the governor fulfills his promise to rebuild the market.

A tomato seller, Abdullahi Oladejo expressed surprise at the high number of people that trooped into the market just after it was reopened. He also decried the emergence of another market at Iroko, urging all that left Shasha for Iroko to return.

Oladejo said, “Trading activities are returning to normal but we thank God. When we opened for sales this morning, we were surprised that we will have a lot of people trooping into the market. Tomatoes, pepper, onion are coming in. We never knew the crisis will go out of hand.

“Some people that wanted to leave the market caused the crisis. They have gone to set up another market at Iroko.

They started the market the same day that the Shasha market was being destroyed. We hand them over to God and we don’t quarrel with anyone.

“We thank the Baale Shasha and Seriki Shasha for being fair to all ethnic groups in their judgment. They have kept this market. Things really were destroyed.

This seller of recharge cards had two shops which were burnt but she now goes about hawking the cards. An onions seller, Akeem Rasaq urged the state government to consider the need to rebuild the market and fulfill its various promises as a matter of emergency.