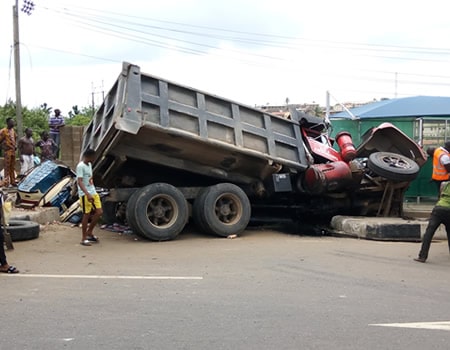 A truck driver, Kabiru Jimoh, has been arrested by Oyo State Police Command after he was accused of crushing a tailor, Oluokun Sogo, who was riding a motorcycle, to death on Monday along Aba Nla-Ogunmakin road in Oluyole Local Government Area.

The incident reportedly occurred at about 10:15 am when Sogo was on his way to Ogunmakin from his Akodu Community to pick up an item from his shop as part of the preparation for his paternal grandmother’s eighth-day burial ceremony.

The 23-year-old boy was said to have left his Akodu Community and had only moved about three poles from his residence when he had a head-on collision with the truck, with registration number APP 199 XC when the driver was about to make an inward turn to the area to upload sand.

The impact was said to be so much that the deceased’s head got stuck in the truck’s radiator.

Speaking with the Nigerian Tribune on Tuesday, Sogo’s father, Mr Dara Oluokun that his family was already surrounded by friends and well-wishers for the final burial ceremony of his mother when his son was killed by a truck driver.

Mr Oluokun, a chief hunter in the community, said that such fatal accidents, usually caused by truck drivers, had been frequent in the local government area.

In protest, an angry crowd reportedly descended on the truck, wielding bottles, cutlasses and sticks, and had smashed its windscreen.

The Divisional Police Officer at Idi Ayunre Division and his officers had a tough time controlling the crowd which almost set the truck ablaze, but succeeded in taking the driver into custody, while the vehicle was also taken to the police station.

It will be recalled that about three weeks ago, a truck belonging to a construction company (name withheld) with registration number DDA 474 XA also killed a motorcycle rider, Timileyin Fatade, and a teacher at Prospect High School, Aba Nla, who was simply known as Mr Adedeji.

Late Adedeji and a female passenger were being conveyed on a motorcycle by its rider when they were hit by the truck.

Timileyin reportedly suffered a spinal cord injury and was rushed to a hospital but succumbed to his injuries before he could be attended to.

The incident also angered the community residents as they blocked the road, which made other truck drivers who arrived at the scene flee to safety, abandoning their trucks.

However, some residents in the state who spoke under anonymity decried the recklessness and lawlessness of many bike riders which had caused several accidents, some of which were usually fatal.