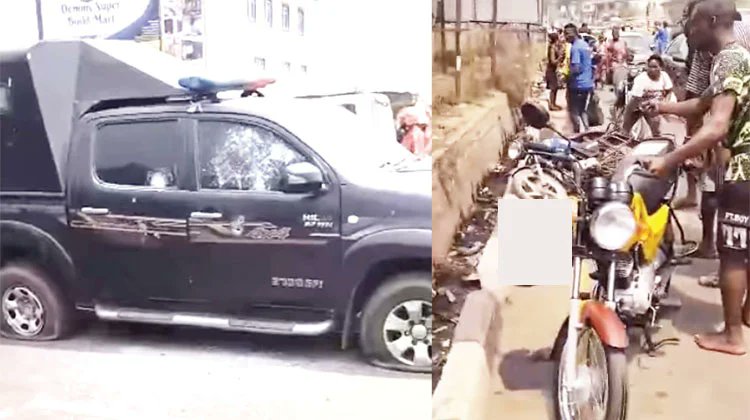 Two policemen and a civilian have been confirmed dead after armed robbers attacked a bullion van conveying money from a bank on Iwo Road to the Idi-Ape area of Ibadan, Oyo State.

Akedeoyo.com gathered that one of the hoodlums was also killed during a shootout with the police.

The incident happened around 1:35 pm on Thursday in the Idi-Ape area, where the robbers reportedly waylaid the bullion van.

Eyewitnesses told our correspondent that the bullion van was heading towards the Gate area of Ibadan when the armed hoodlums, who were in a Toyota Sienna, overtook the van and opened fire on the occupants and the police escorts.

One of the victims reportedly killed was an Okada rider who was oblivious of the mission of the occupants of the Sienna.

The commercial motorcyclist, who was said to be in a hurry, reportedly attempted to overtake the hoodlums’ vehicle when he was shot dead by the robbers.

But some residents also said the escorts engaged the robbers in a shootout, adding that the hoodlums outnumbered the operatives and killed two of them.

Some motorists, who were unlucky to be at the scene, reportedly sustained gunshot injuries.

A man, who was driving in a sport utility vehicle, was said to have been hit by a bullet in the upper arm and was rushed to a hospital after the robbers left.

A resident, who identified himself as Waheed Adegoke, said the robbers carted away huge sums of money from the bullion van.

He said, “The armed robbers attacked a bullion van conveying money from a bank to another one at Idi-Ape. It happened at a junction close to the traffic light.

“Some lives were lost, including innocent persons. I saw two policemen on the ground after the armed robbers left. Two of them died and one was seriously wounded. Some persons were also injured in their vehicles and those who managed to escape from their vehicles hid inside the drainage.

“There was blood everywhere and people were weeping, as residents trooped out to rush the victims to hospitals.”

Another resident, who refused to disclose his name, told our correspondent that the incident caused the road to be deserted, as motorists and motorcyclists fled the area.

He said, “I was coming from the Gate area when the incident happened. I had to hide somewhere safe until the shooting was over. Some of us moved to the scene to rescue the victims and some who were still in their vehicles were asked to be driven to hospitals for treatment.

“There were spent bullets on the road and persons were killed. I saw two policemen on the ground shot and they had apparently died.”

He added that some policemen from the area command at Testing Ground, Iwo Road, about one kilometre from the scene, later arrived.

Some videos obtained by our correspondent showed vehicles that were shot with shattered windscreens; there were bullets and blood on the road.

Some injured victims were also seen, including two policemen who were later picked by sympathisers and taken to a hospital.

The state Commissioner of Police, Ngozi Onadeko, while speaking to journalists after the incident, described the attack as a coordinated one.

Later, the CP, in a statement made available to our correspondent, confirmed that three persons, including two policemen, were killed.

“The armed robbers engaged the police officers escorting the bullion van and in the process, an undisclosed amount of money was carted away.

“In a swift response, the police equally neutralised one of the armed robbers, while some were believed to have escaped with multiple gunshot injuries.

“Consequently, a civilian onlooker was hit by a stray bullet and died at the scene, while two police officers later died in the hospital as a result of gunshot injuries. Four others, including two police officers, are responding to treatment.

“The citizenry are hereby enjoined not to panic as efforts are in top gear to track down and apprehend the criminal gang.”