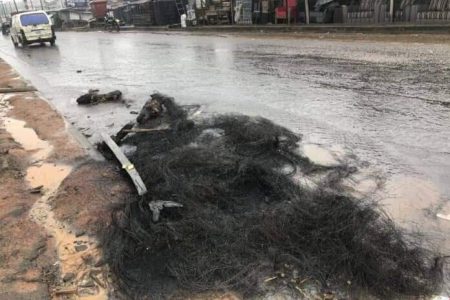 Two suspected armed robbers met their waterloo on Friday in Ibadan as they were at the receiving end of justice meted to them by an irate mob.

The duo who were said to be on the run after attacking two men who just left Premier Hotel swimming pool where they went to unwind were apprehended at Gbaremu area, along Sango-Eleyele expressway.

The two victims whose names were given as Rasheed Ololade and Temitope Samson sustained gunshots as a result of their resistance when the robbers accosted them. They were both rushed to the University College Hospital by sympathisers and were immediately taken in for surgery to remove the bullets.

As gathered, the two robbers made their escape to Gbaremu area where they attempted to attack another victim. The robbers did not know that they were still being chased from Premier Hotel area where they first attacked Samson and Rasheed. It was in the process of escaping after robbing another person that a brave taxi operator hit their get-away motorcycle making it possible for them to be surrounded by the angry mob.

They were immediately subjected to beatings after which they were sprinked with petrol and set ablaze by the irate mob.

Rasheed and Samson are said to be stable and recuperating well at the University College Hospital.