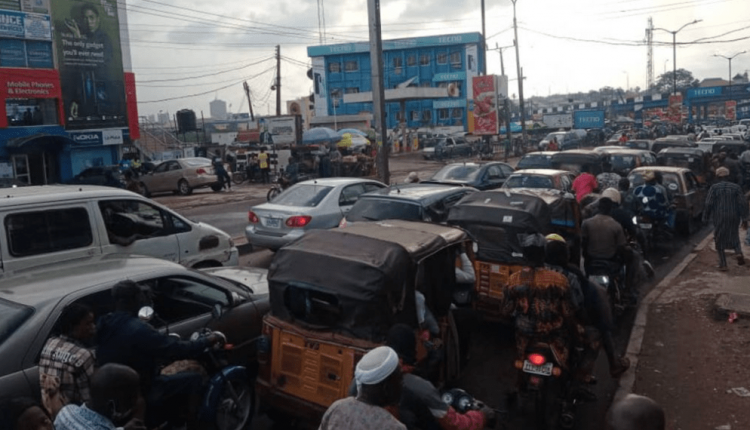 Commuters continue to groan in the city of Ibadan in Oyo State as traffic congestion and indiscriminate commercial activities disrupted major roads.

Ibadan used to be one of the most peaceful states in the Southwest, with little or no traffic congestion and its lesser cost of living. Unfortunately, this is luxuries are fast disappearing.

According to The Guardian, in recent times, citizens of Ibadan have been agonising under excruciating traffic congestion, which according to them are either due to bad portions on the narrow roads that could no longer contain the volume of vehicles.

Added to the factors creating traffic is the indiscriminate spilling of commercial activities onto major roads, thereby preventing free flow of traffic.

The unusual traffic has been noticeable along Iwo Road, Iwo Road Junction and Bus Terminus in Ibadan that leads to other parts of Oyo and other states. It is a major terminal where travelers going to Osun/Ife, Lagos, Ogun, Kwara and other parts of the southwest board vehicles just as it also serves as a business district mixed with residential apartments.

Three critical factors observed to be responsible for the traffic at Iwo Road Bus Terminus include indiscriminate parking of commercial buses that load passengers right in the middle of the expressway, traders displaying their wares on the roads as well as the activities of street hawkers who deal within moving vehicles.

A few meters from Iwo Road Round about along Ibadan Osogbo Iwo Road, a big gully on the road was also observed to be creating serious traffic just as reckless driving of commercial motorcycle operators is not helping the situation.

A commuter, Lanre Sorinde, who spoke with The Guardian said Governor Seyi Makinde would need to take decisive steps if the traffic congestion at Iwo Road must stop. He also noted that the government would need to create designated bus stops for the ubiquitous Micra cars used for commercial commuting to enable them park and pick up passengers.

According a resident, Sakiru Ayunde, “the havoc most of the Micra car operators wreak on Ibadan Roads are many. They can stop suddenly anywhere to pick passengers.”

Another traffic point is the Challenge Roundabout, which connects commuters around Ring Road, Molete, Orita and those coming from Lagos-Ibadan Expressway, either heading towards Iwo Road or those coming from Iwo Road heading for Challenge, New Garage and Felele.

A civil servant Funmilayo said it is always hectic whenever anyone is caught up in the traffic at Challenge in the evening. According to her, “sometimes you spend close to 30 minutes or more.”

Gradually, the traffic at Mokola Roundabout is indirectly creating an acronym for itself. Commuters are now won’t to warn anyone to avoid ‘Mokola Traffic’ if you have any urgent business to attend to.

Under the Mokola Flyover, the Micra commercial cars load on the road while a considerable portion of the road has been overtaken by traders who display their wares indiscriminately.

The road is important as it connects to Agodi GRA and leads to the University of Ibadan, Ojoo and Sango, among others. Many people from Molete, Liberty road often head in that direction too.

Few meters to Sango Bus Stop and Iyana Poly, an abandoned railway line is also noticed to be slowing down vehicular movement just as indiscriminate parking of commercial buses on the road at Sango Bus stop is a factor that must be addressed. Although there is a bus terminus at Sango, most commercial vehicles hardly make use of it.
A road user, who pleaded anonymity said, “The traffic congestion in some areas in Ibadan such as Iwo road, Olodo-Iyana Church, Olorunsogo, Mokola and so on is becoming unbearable, especially when schools are in session. This happens when different vehicles, especially taxis popularly known as “Micra” wants to advance in front of each other.”

It has been argued that the traffic congestion is as a result of the increasing number of motor vehicles and population without corresponding improvement in transport facilities but most residents expressed the view that illegal parking/bus stops, poor drainages and flooding, lack of parking space, dilapidated roads, trading activities, loading and discharging of passengers, lack of traffic light at some road intersections are key areas government ought to address to improve the situation.

They said that the challenge is affecting residents negatively in increased fuel expenses, loss of productive hours, longer hours of commuting to work and higher vehicles emissions.