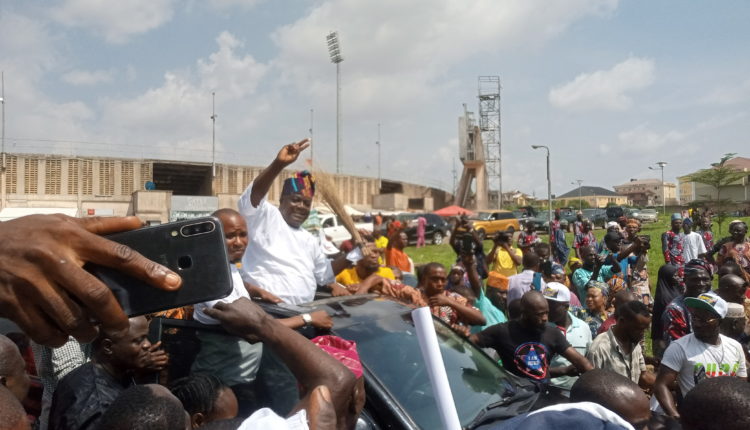 • ‘I mandated secretary to proceed with congress’

UNEASY calm pervades the All Progressives Congress (APC) in Oyo State, following the emergence of Isaac Omodewu as chairman of the Oyo APC, at Saturday’s state congress of the party.

Omodewu emerged amid drama to include some party members, faulting the delegates’ list and asking for suspension of the congress; chairman, State Congress committee, Lawan Gambo prevented from leaving his hotel while committee secretary, Abdulahi Bello, conducted the congress that began at about 4.30 pm.

Though some party members failed to have their way in having the congress postponed one more time for scrutiny of what they described as a falsified list, they noted that the posture of the national leadership of the party, in the coming days, would determine the chances of the party the next election in the state.

The emergence of Omodewu is seen in some quarters as having left in some members wounds that will be difficult to heal.

Some party members have also said they will adopt a “siddon look” approach, watching whether the national secretariat considers one tree enough to make a forest, especially in achieving success in the 2023 election.

The particular grouse of some party members is that the delegates’ list brought by the Gambo committee was at variance with the consensus and harmonised ward and local government congresses lists arrived at in Ibadan before it was taken to Abuja.

In what they described as contrary to fairness, injustice, equity, they, particularly, felt slighted that various stakeholders meetings held in Ibadan on need for transparency was amounting to exercise in futility.

Should the status quo from the congress remain, a cross section of party members noted that the APC would be going into the 2023 elections without a united front.

Though the new chairman, Omodewu, is reportedly set to begin reconciliation moves, some party members said they had been left so bruised to sit at reconciliation table with the Omodewu-led excos.

Meanwhile, in the midst of the controversy over the falsification or not of the delegates’ list, four members of the Oyo APC Congress Committee said they were not part of Saturday’s congress. The four members: Honourable Olanrewaju Edun, Mallam Abdullahi Kotangora, Mr Diran Iyantan and Chief Ralph Igbokwe added that the chairman of the committee and the seventh member also could not attend the congress as well due to security reasons.

They noted that owing to controversy on the authenticity of the list and some protesting members of the APC, who blocked access to their hotel, they only managed to escape from the apartment.

They expressed surprise that the congress held, noting that the Secretary of the Committee, Abdulahi Bello was on his own and did not have their authority to conduct the congress.

They urged APC headquarters to take steps to address the acrimony in the party to avoid the mistakes of the last elections.

Speaking with Nigerian Tribune on the controversy, Gambo described notions of falsification of the delegates’ list as unfounded and baseless.

He said he only worked with the list handed over to him by the national secretariat of the party, asking those who think that the list was falsified to take their agitation to the APC headquarters.

Gambo said he was the one that mandated his secretary, Abdulahi Bello to conduct the congress because he was held hostage in his hotel for about 12 hours.

On disharmony in his congress committee, he disowned those four persons who said they were members of his committee and did not mandate the committee Secretary to conduct the congress.

Gambo said those four were not part of the list of committee members given him by APC national secretariat, stating that he worked with six other persons.

Gambo said: “As far as I am concerned, I do not know any falsified list and falsified list never existed. The list I gave to the stakeholders was the only authentic list the national secretariat gave me.

“I have done my congress, whether I am physically presented or not, the congress has been conducted and it was successful.

“I was under hostage for 12 hours. There are virtually over 2,000 people who barricaded my hotel, put heavy buses on the road and only a human can cross and no vehicle.

“Since the secretary was on the convention ground, I gave him the mandate to preside over and he did it and it was successful.

“All the positions were done by consensus. We carried every single person along.”

Oyo ALGON Congratulates Arapaja, Advised Him On Fair Play And Unity Within The Party