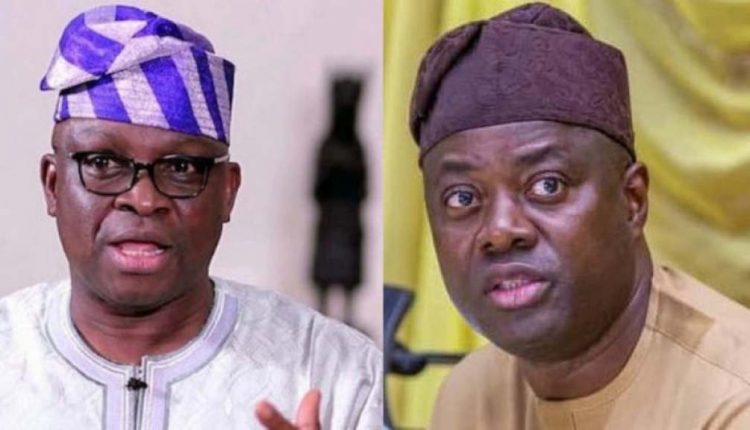 Untold Story Of South West PDP Congress, •Why Fayose Is Angry With Makinde •The Fight Over Party Chairmanship, VP Slot

FURTHER details emerged on Friday as to how a former governor of Ekiti State, Mr Ayodele Fayose, lost his bid to return the immediate past National Vice Chairman (South West) of the Peoples Democratic Party (PDP), Dr Eddy Olafeso, to the position he held until he resigned to seek the Ondo governorship seat last year.

Fayose was the arrowhead of Olafeso’s campaign to regain the position, a development that saw him openly confronting the governor of Oyo State, Mr Seyi Makinde. Ahead of the zonal congress of the party held in Osogbo, Osun State, Fayose had consistently insisted that he would not concede leadership to Makinde, whom the party’s constitution recognises as the leader of the party in the South West, being the only elected PDP governor in the zone.

It was an intense battle that heralded the zonal congress with everyone thinking hell would be let loose at the venue.

But sources within the PDP told Saturday Tribune that Fayose was playing what was described as “experienced PDP politics,” in a bid to outwit Makinde.

He was said to have told the governor of Rivers State, Nyesom Wike, that Makinde had signed an accord with former Vice President Atiku Abubakar over the 2023 election.

It was learnt that Fayose visited Wike and sought to convince him that Makinde was working with Atiku ahead of the 2023 election and that the former number two man had reserved the vice president’s slot for Makinde.

It was gathered that Fayose equally reached out to the national chairman of the PDP, Uche Secondus, whom he told that Makinde was seeking to replace him with a chieftain of the party from the South West.

According to inside sources in the PDP, Fayose had convinced Secondus that the celebrated intervention of Makinde in the crisis that rocked the Lagos State chapter of the party was to pave the way for the emergence of Chief Bode George as the new national chairman of the PDP.

The former Ekiti State governor was also said to have told the PDP chairman that Makinde had later changed the preferred candidate to replace Secondus when he facilitated the resolution of the crisis in the Osun State chapter of the party and the re-entry of former governor of the state, Prince Olagunsoye Oyinlola.

“It was very loudly projected to the Secondus camp that Makinde had already positioned Oyinlola as his replacement and that if the governor of Oyo State was not checkmated, he would replace the entire National Working Committee of the PDP,” a source said, adding that the plots eventually paid off when he succeeded in getting the sympathy of some NWC members.

Oyinlola was said to have confronted Secondus with the information and asked the PDP chairman if the party no longer filled party posts through zoning.

But the bubble burst a while ago as the duo of Wike and Secondus, after comparing notes, discovered that the same person who had alleged that Makinde was eyeing the position of the vice president was also behind the rumour of a possible replacement of Secondus.

“Wike and Secondus had asked themselves if it was possible for the PDP to zone the two posts to the South West and it became clear to Wike that someone was trying to play him against his friend and colleague, Makinde,” the source said.

A competent source said Makinde met with Wike on the issue with Fayose himself in attendance and the matter was resolved.

After Wike realised the plot against Makinde by the Fayose camp, it was gathered, the anti-Makinde camp then turned its attention to the national chairman who appeared convinced that the South West might come for his seat if Makinde had the chance.

The former governor was, therefore, said to have intensified lobby among members of the NWC to ensure that they put in place favourable conditions that would ensure victory for Olafeso at the zonal congress.

Working with aggrieved leaders of the PDP in Oyo State, Fayose was sure he had perfected the victory dance for Olafeso, especially following his push that forced a relocation of the zonal congress from Ibadan to Osogbo.

But Makinde turned the table against Fayose’s calculations at the Osogbo congress of April 12 with the victory of Ambassador Taofeek Arapaja.

Sources hinted that Fayose’s calculation that it was practically impossible for Makinde’s candidate to defeat his candidate led to the resolve to seek peace and speak like statesmen at the zonal congress.

“The plot by Fayose and his supporters was to dress Makinde in borrowed robes following the imminent defeat of Arapaja. They resolved to recognise Makinde as the leader, hoping to force the election of Eddy Olafeso down his throat,” one of the sources said.

According to reliable sources, the decision by Fayose and Olafeso to adopt the statesmanlike approach while speaking at the congress was borne out of the conviction that Olafeso would win and that Makinde would have no choice but to work with him.

But a source said even Fayose’s vote was voided as he reportedly dropped his ballot paper in a wrong box.

Those who watched the former Ekiti State governor as he dropped the ballot for Olafeso in a wrong box saw how he shook his head in anguish upon the realisation of the error, the source said.

Some members of the Fayose camp are said to have wondered why he mismanaged his own vote. It was gathered that some key leaders in Fayose’s camp were infuriated by Fayose’s appearance and utterances on national television on Wednesday where he credited only himself throughout the interview.

“His use of ‘I’ throughout that interview meant that he was the only relevant person in the push to install Olafeso. And that’s not true. We have a number of our leaders who spent heavily to make Olafeso’s dream come true. That is why Ogun delivered massively for Olafeso. Even Ekiti was nearly 50-50,” another source said.

Investigations, however, confirmed that the Makinde/ Fayose feud dates back to many years. It was said that the duo enjoyed a rosy relationship and that Makinde, as a private citizen, had two permanent suites in Asokoro, Abuja, one of which Fayose occupied free for several months. It was learnt that the crack between them became noticeable following the infiltration of a top Lagos politician, whose bidding Fayose appears to be doing.

REPORT: How Gunmen Abduct 15 Oyo Residents In One Month, Collect Millions Of Naira As Ransom