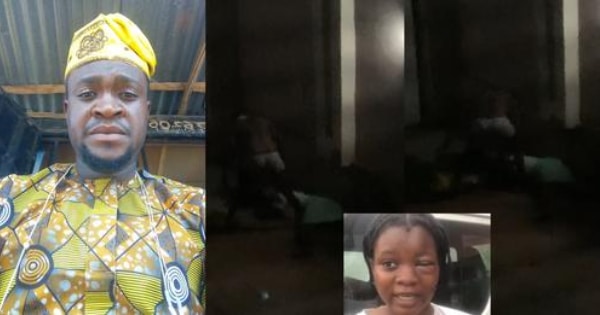 The Oyo State Police Command has commenced investigation into the alleged assault by one Taofeek Gbolagade on his pregnant wife, in the Ogbere Housing Estate area of Ibadan, Oyo state.

Recall that Akéde Ọ̀yọ́ had yesterday reported that Gbolagade was called out for assaulting his wife over Sahur, the pre-dawn meal usually taken by Muslims in preparation for fasting during Ramadan.

In a viral video being circulated online, the man is seen punching his pregnant wife, who continued to cry out in pains.

The man reportedly beat his wife for over 30 minutes before she managed to escape and leave the house.

Meanwhile, one of the neighbours said the man was fond of beating his wife over any little misunderstanding.

“The husband did not mind that the wife is pregnant. He reportedly beat her for close to 30 minutes and was crying. She eventually escaped and fled to her parents’ house”, he stated.

The incident was said to have been reported to the police by her family members, while the husband was also said to have fled home.