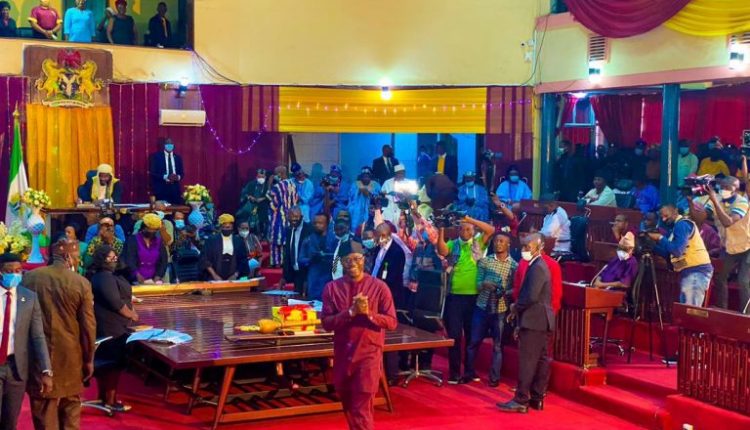 Christened Budget of Growth and Opportunities, Makinde said N156 billion will be injected into the economy through investments in infrastructure and ensuring that Oyo residents have higher purchasing power.

Speaking further, Makinde affirmed that for the first time, the proposed capital expenditure is more than the recurrent expenditure.

For the 2022 fiscal year, the governor projects N79.5 billion for the internally generated revenue which he noted that his administration intend to achieve without increasing taxes but will continue to expand the tax base to include more in the informal sector.

The budget Presentation had in attendance, Alaafin of Oyo Oba Lamidi Adeyemi 111, Olubadan of Ibadanland who was represented by Otun Olubadan, High Chief Lekan Balogun, Soun of Ogbomoso among other traditional rulers in the state. His words:

“Last year, we presented to you our budget on Continued Consolidation. I had a chance to present to you a report of our accomplishments over the previous budgetary cycle and our plans for the 2021. Mr Speaker Sir, Honourable Members of the House, this year, it gives me great pleasure to be with you again this year for the presentation of the 2022 Fiscal Budget which we have tagged a Budget of Growth and Opportunities.

But before I make this presentation, let me express my gratitude to Mr Speaker, Right Honourable Adebo Ogundoyin and all Honourable Members of this 9th Assembly for your continued support of our policies and programmes in Oyo State. Let me also use this opportunity to reaffirm our commitment to a stronger working relationship with the legislature as we strive to move Oyo State to prosperity.

Mr Speaker Sir, Honourable Members of the House, the last time I was here to present the State of the State Address, I took the opportunity to invite you to the commissioning of the Lekan Salami Sports Complex, Adamasingba. Let me thank you all for honouring that invitation. You must have been as proud as I was to see our darling Shooting Stars get the first feel of the turf and beat their opponents in an international friendly.
We know that bolstered their confidence to go on to secure a return to the NPFL after four years of relegation.

As we complete projects, we start new ones.
Last year, we promised that we will continue to invest on infrastructure in the state. We have worked hard to ensure that infrastructural development is not restricted to just one zone of the state.

In education, we have continued to make investments at all levels. At the primary level, we completed 26 model schools across all zones in Oyo State, we built 57 classrooms, installed boreholes and improved the sanitary condition of existing schools through the construction of toilets. We have also continued to improve the quality of education in Oyo State. We not only recruited teachers as reported, but we have also trained them on best practices.

More recently we completed the recruitment of 692 education officers in the state.
In Healthcare, we have continued to keep our promise of one Primary Healthcare Centre (PHC) in each ward in Oyo State. In the past year, we have completed the renovation, upgrade and equipping of 40 PHCs. Secondary healthcare facilities have not been left out as we continued to upgrade and rehabilitate existing facilities to serve the good people of Oyo state.
On Security, we have made provision to recruit more Amotekun Corps members and we will continue to make investment on technology that supports our security architecture in Oyo State.

We have always prioritised infrastructural development in Oyo State. And last year was not an exception. We have recorded strides in the development of infrastructure which we believe will generate more income for the state. The Challenge Bus Terminal is 70% complete, while the other three terminals at Iwo Road, New Ife Road and Ojoo are ongoing. The Fasola Agribusiness Industrial Hub is at about 40% completion. Significant progress has also been made in reconstructing the 21km Airport- Ajia-New Ife Express Road with a spur to Amuloko, 12km Apete-Awotan-Akufo Road and the 44.7km Saki-Ogbooro-Igboho Road. The Idi Ape-Basorun-Akobo- Odogbo Barracks Road and the 5.2km Gedu-Oroki-Sabo-Asipa Road are nearing completion.

There is still so much more that needs to be done. We are aware of the complaints of our people regarding roads in Oyo State. We are determined to meet their yearnings for high quality infrastructure in the state and that is why we continually embarking on road rehabilitations and reconstructions. In the immediate, we are carrying out palliative works on these roads.

Mr Speaker, Honorable Members of the House, in keeping with our tradition in the last two years, we again embarked on a Townhall Meetings on the 2022 budget and given stakeholders the opportunity to contribute towards the direction of this budget. The people have again spoken and based on their feedback; we have prepared our budget for the 2022 Fiscal Year. I have the honour of presenting to the House this Two Hundred and Ninety-Four Billion, Five Hundred and Sixteen Million, Four Hundred and Forty-Five Thousand, One Hundred and Seven Naira (N294,516,445,107.00) 2022 Budget Proposal.

As stated earlier, this is a budget of growth and opportunities.
Growth, as we inject One Hundred and Fifty-Six Billion, One Hundred and Thirty-Six Thousand, Nine Hundred and Seventy-One Naira (N156,000,136,971.00)into our economy through investments in infrastructure and ensuring that our people have higher purchasing power. For the first time, our proposed capital expenditure at 52.97% is more than our recurrent expenditure. A major project we will be carrying out in 2022 is 110km Ibadan Circular Road. This tolled road will be a major economic boost as it will create an alternate entry and exit point out of Ibadan and connect the new economic corridor and business district, we are building at Moniya. Also, we will commence the reconstruction of the Iseyin-Ogbomoso Road to further boost economic activities in the state.
Opportunities, as we continue to create an enabling environment for the private sector to thrive and open our doors to both local and foreign investors in agribusiness, tourism and other sectors. We are also exploring new areas of comparative advantage and encouraging investments in them. As we always say, our doors are open, come and talk with us. In the next few weeks, we will be welcoming the world to Ibadan as we host the Oyo Agribusiness Summit 2021. This is a collaboration between the Oyo State Agribusiness Development Agency (OYSADA) and the International Institute of Tropical Agriculture (IITA). Let me use this opportunity to invite you all to come and be part of this three-day event.

Mr Speaker Sir, Distinguished Members of the Oyo State House of Assembly, please permit me, at this point, to give a report on the performance of the 2021 budget going by half-year analysis.

The Oyo State Budget performance stood at 60%. We still have our sights on raising this to 75% before year-end.
On the revenue side, the state’s actual aggregate revenue was N78.2billion.The sum of N16.2 billion representing 31.49% was realized as the Internally Generated Revenue (IGR) while Statutory Allocation from the Federation Account Allocation Committee was N17.13 billion representing 62.29%.

For the 2022 fiscal year, we are projecting and Internally Generated Revenue of N79,796,513,040.00 (Seventy-Nine Billion, Seven Hundred and Ninety-Six Million, Five Hundred and Thirteen Thousand, and Forty Naira). This is a tall order, but we intend to accomplish this without increasing taxes. As in the previous years, we will continue to expand our tax base to include more in the informal sector. We already see this working to our advantage as the recently released figures shows that our contributions to Nigeria’s Value Added Tax shot up to over N64 Billion.

“We have continued to follow the Roadmap to Accelerated Development in Oyo State, 2019-2023 which highlights the four sectors that our administration has prioritised in engineering a prosperous Oyo State.

For the 2022 Budget proposal our budgetary allocation to the Education sector atFifty-Four Billion, One Hundred and Sixteen Million, Seven Hundred and Seventy-three Thousand,Seven hundred and Sixty-four Naira (N54,116,773,764.00) represents 18.37% of the total budget. As can be noted, we have continued our tradition of keeping the education allocation above UNESCO standards.

“Finally, we continue to use agribusiness as one of the main drivers of the Oyo State Economy. To this end, we propose an allocation of Eleven Billion, Three Hundred and Nineteen Million, Two Hundred and Eighty-Nine Thousand, Seven Hundred and Thirty-Seven Naira (N11,319,289,737.00) which is 3.84 % of the budget to this sector.

Mr Speaker, Honourable members of the Oyo State 9th Assembly, we firmly believe that our 2022 Budget of Growth and Opportunities will keep Oyo State on the track to prosperity. We are resolved to continue to make the lives of the good people of Oyo State better. And I once again thank you for your noble role in making this possible.

It has been an honour to make this proposed budget presentation to you, Mr Speaker Sir and Honourable Members of the House. We are assured you will give our proposal the usual timely consideration, as we work together to engineer a modern Oyo State.”

JUST IN: Makinde Presents N294.5bn “Budget Of Growth And Opportunities”