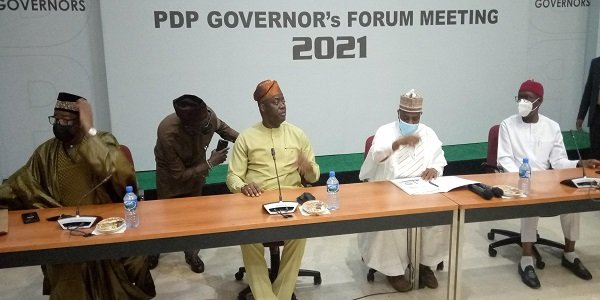 Thirteen governors on the platform of the People’s Democratic Party (PDP) have started their scheduled meeting in Ibadan.

The number includes twelve governors and a deputy.

They are presently in a closed door session at the International Institute of Tropical Agriculture (IITA).

The governors arrived the venue in an Oyo State marked white Coaster bus at about 1:30pm.

In his welcome address, Chairman of the Forum, Governor Tambuwal said the Forum is happy to be in Ibadan for the second PDP governors forum meeting outside Abuja since the forum started.

He thanked the host Governor Seyi Makinde for accepting to host the meeting and the reception extended to the visitors in terms of hospitality.

He also thanked the government and people of Oyo State for the opportunity to make the event conducive while also thanking the management and staff of the IITA for providing the venue as a result of the closeness with the Oyo state government.

He thereafter requested the press to excuse the governors as they began a business of the day in a closed door.

The meeting which is currently ongoing started at about 1:45pm.

Two other governors including: Ben Ayade (Cross Rivers) and Darius Ishaku (Taraba) are still being awaited at the meeting.