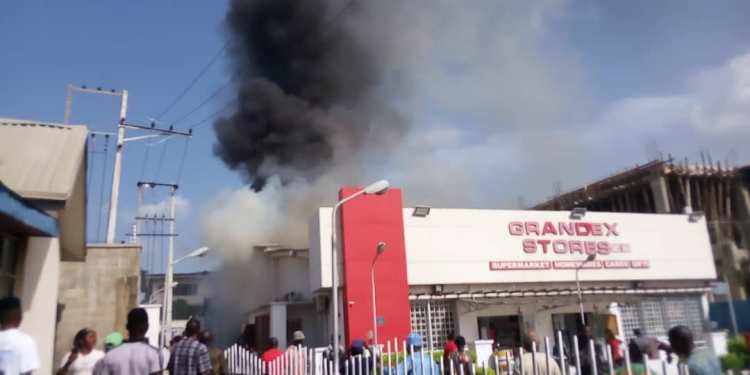 Items worth millions of naira, were yesterday destroyed as part of a grocery and household supermarket, Grandex stores, believed to be owned by Mrs. Florence Ajimobi, wife of the late former Governor Abiola Ajimobi, located at Bodija, Ibadan, Oyo State, was razed by fire.

The incident which started at 3:00 pm, from the back of the supermarket, gradually spread to the main store.

The men of Oyo State Fire Service who came to put off the fire were not able to do so as the fire kept raging, while it took the combined efforts of the Federal Fire Service to extinguish the fire.

The federal fire fighters who came later went to the area close to the back of the stores to spray water to the raging fire, which finally put an end to the incident.

Those reading newspapers at the popular Osuntokun junction, also saved the day as they rallied round to fetch water and bring fire extinguishers to quench the fire before the arrival of fire fighters.

According Mr. Bamidele Osinowo, an eyewitness who spoke with this correspondent said: “It started about 3.p.m. When we heard the shouts from the workers, I immediately called the Oyo State Fire Service.

I brought out my phone to call the fire people. Within ten minutes, they came with a bigger truck. We moved in to join them to bring extinguishers . Somebody from Zenith Bank brought one another person brought from Afe Babalola Educational Centre, Bodija.”

Mr. Osinowo decried the absence of fire hydrants in the supermarket, saying if the hydrants were there the fire would have been put off on time.

Later, Mrs. Florence Ajimobi arrived at the scene, as some of the aides joined in evacuating goods from the stores, while some stern-looking officers of Operation Burst were on ground to prevent looting.

The team leader of the Federal Fire Service who spoke with journalists under the condition of anonymity, attributed the incident to electrical sparks and over-loading of electrical sockets.

EndSARS: How Our Husbands were Killed -Wives of Policemen murdered narrate Story, Beg Government for Assistance.