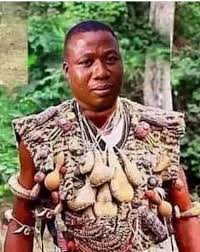 Igboho is currently in detention in Benin Republic over issue bothering on illegal migration among other offences.

The protesters carried placards with various inscriptions, demanding the immediate release of the activist currently in custody of the Republic of Benin.

As at the time of filing this report, the protesters were at Idi- Arere.