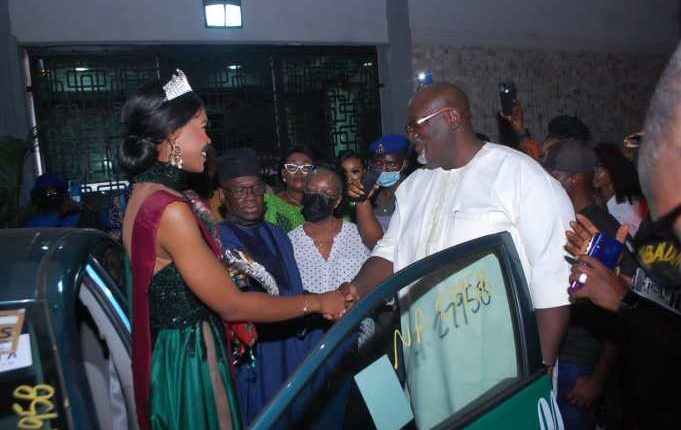 The mother of Mary Oladejo, an indigene of Oyo town, who last Sunday night won the 19th edition of the annual Miss Oyo State beauty contest, broke down in tears when her daughter brought home the car prize.

At the Apata home of the Oladejos, the mother, a widow, was seen thanking God for not forgetting her and the children.

The pageant, which was organised by Silverstone owned by an ace Nigerian journalist, Isaac Brown, was held at the Jorgor Centre, Ibadan.

During her handover speech, the outgoing queen, Ms Adeyemi, said: ‘‘The expression of my gratitude also goes to all individuals, organizations, and friends who supported my ideas. With their support, I was able to execute five projects (in commemoration of important dates) during my reign as Miss Oyo State: New Year, Valentine’s Day, International Women’s Day, Children’s Day, and Independence Day’’.

Miss Oyo 2021
19 contestants made it to the boot camp, which lasted for over one week.

Among the contestants were graduates, undergraduates, and self-employed youth.

Ms Oladejo got a car gift courtesy Olajide Adedeji, a lawmaker representing Ibadan North West/ South West Federal Constituency. She was also given two plots of land, a complete dining set, a freezer among other perks.

Mr Adedeji also gave each of the contestants N100,000 for their efforts and encouragement.

Shortly after she was crowned, Ms Oladejo promised to use her reign for the betterment of the pace-setter state.

“I’ll do things that would always make people remember me even after my reign is over. My
reign would be for only good things,” she said.