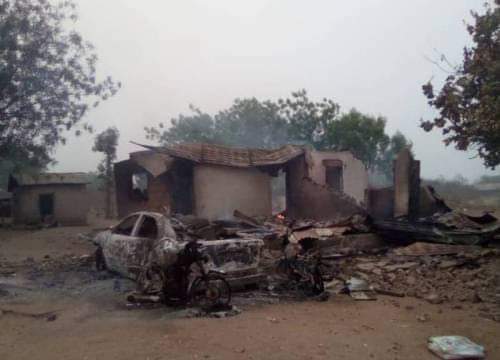 Igangan has surfered another dastardly attack from men of the underworld, Suspected to be Hoodlums, leaving many dead, palace, properties burnt in the process.

The Suspects who an eye witness said were numbering about 50, use various weapons such as dynamite, Guns, machetes and various other dangerous armouries.

A Fuel state was Burnt down, in the various video obtain by Akéde Ọ̀yọ́, a truck is seen burning in flame’s, while the palace of Asigangan of Igangan was Reportedly Raised down.

This is coming few days after the chairman Oyo State Security Network codenamed Amotekun Corps, General Kunle Togun (rtd) alleged that foreign Fulanis have encamped the entire Southwest region and may strike if nothing is done urgently.

A former caretaker chairman of the council, Tunji Omolewu, who confirmed last night’s incident to an online newspaper, said he had to rush down around 5 am this morning.

”People had barely retired to bed when they said they sighted motorcycles entering the town. Before our people could know what was going on, they had started killing people. I got the call around 11 pm. We were on our way from Ekiti where we had gone to do the Yoruba nation rally. I got to Ibadan around 12 am and when the calls  did not stop coming, I decided to come home. I have counted more than 20 dead bodies. The palace of our monarch was torched. Adolak filling station too was burnt. We are assembled here…” he said, almost breaking down in tears.

A former caretaker chairman of neighbouring Ibarapa Central, Yemi Akinlabi, who is holidaying in the United States, said his phone was bombarded with calls.

”It is so sad. Only few days ago, our people got intelligence report and forwarded it to the appropriate quarters for actions but here we are today. Are we going to continue to live in fear in our land? I have spoken to General Toogun about last night’s incident and we would want him and his team to do something. Our people must not be allowed to resort to self-help,” he added.

Only last Wednesday, during the tour of project to mark his two years in office, Governor Seyi Makinde had disclosed that insecurity in Ibarapaland has been the most challenging and that his government has put in place several measures, including the creation of a Base for Operation Burst in the area and deployment of more Amotekun corps, among others.

He said that these measures have yielded positive results in the last few months.

A statement by the Chief Press Secretary to the governor, Mr. Taiwo Adisa, quoted Makinde as saying that in order to tackle the security challenge, the government is about to recruit more Amotekun corps, adding that it would also take a decision on what to do with the uncompleted 60-bed health facility in Igangan, which has become a hideout for criminals.

He said: “The issue of insecurity brought me here the last time and I remember that I made a comment that we needed to tackle those challenges because it is the only way it can affect our economic prosperity. Farmers in Ibarapa could not freely go to their farms because cows are invading their farms.

“It is a problem that has been existing even before we came into government, and one of the promises I made then was to tackle security challenges. And the question to take home is – can anybody here imagine Oyo State without Amotekun? It is one of the initiatives we brought forward. Before we came, there was nothing like that. Yes, there may still be few areas we need to improve on but we all should work together with Amotekun.

“Well, since the last time we came here and now, we have taken various steps to ensure that the people of Ibarapaland and, indeed, the whole of Oyo State sleep with their two eyes closed.

“Ibarapaland is the most challenging zone as far as security is concerned. Since the last time I came here and now, there has been relative progress but we will do more. We will strengthen security. Between the last time I came and now, we have set up Operation Burst base and we are in the process of recruiting more Amotekun personnel.

“But I want to appeal to you not to leave the government alone to face the issue of insecurity, as we all need to join hands to make things work. That is the only way; we have to keep moving together, because the government alone cannot do it. We expect you to work with us and the security agencies.”

Igangan, a-177 kilometer town away from Ibadan, the state capital, had come to limelight, though for bad reason, following last December’s murder of politician and large-scale farmer, Dr. Fatai Aborode, a large-scale farmer, by persons whom his farm manager told PREMIUM TIMES he could identify as Fulani.

It took the intervention of Sunday Adeyemo, before normalcy could return to the town. But that was after he issued eviction notice to the head of the Fulani community, the Sarkin Fulani, Abdulkadir Salihu, and his kinsmen.

Igangan has been on the News for months over series of dastardly killings by fulani Herdsmen.

Recall that a renowned YORUBA NATION Activist Chief Sunday Adeyemo Popularly known as Sunday Igboho succeded in chasing away the Seriki fulani, Saliu Abdulkadri from the land, after they were fingered in various kidnapping and killings, leading to unrest in the Area.

This Latest Killings is an eyesaw, as it recorded many innocent people dead with properties Worth Millions burnt down.

It was said to be a calculated Attack from the men of the underworld.

Rtd. Hon Debo Ogundoyin confirm the incident in a statement he made available to Newsmen reads…

” Early this morning I received distressed calls of fresh attack on our people in Igangan, Ibarapa North Local Government by bandits and suspected criminal herders in which about 5 residents were allegedly killed, some injured and properties burnt.

“I condemned this unfortunate attack and sympathy with the families who lost their loved ones and properties. I also appreciate the security personnel, vigilantes, Amotekun corps, our local hunters and brave men that rose in the middle of the night to combat the bandits and safe lives of our people.

“These murderers are not tired and It is our collective responsibility to protect our lives, women, children and our communities from these evil doers.

“While assuring my continuous support to every adoptable security measures and strategies, I’m also calling on all security agencies- the Nigerian Police, Operation Burst, Amotekun Corps, Vigilante Groups, Local Hunters, Community Leaders within and around Ibarapaland for an urgent security meeting.

“If this insecurity persist, it means we have not done enough. All of us.

“It is not time to sleep…let us all stay awake”.

As at the time of filling this report efforts made to reach the Oyo State Police Spokesperson Adewale Osifeso has prove abortive.