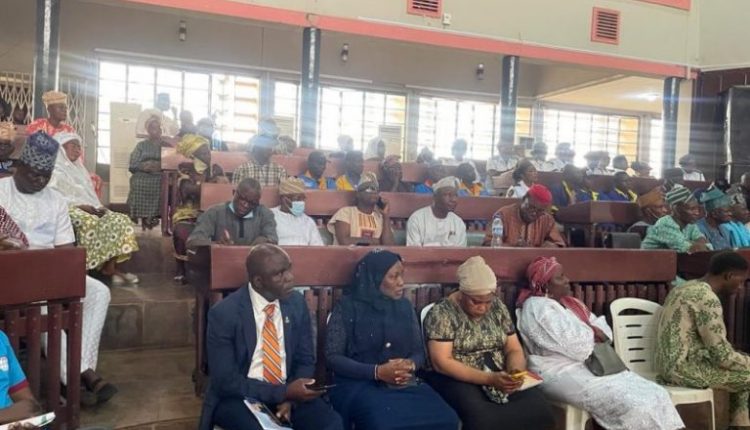 The Oyo State Government in partnership with Mottainai Recycling Limited on Wednesday, met with Traders and Artisans in the State, to proffer collective solutions to the waste management problems in Oyo State.

A statement by the Commissioner for Information, Culture and Tourism, Dr. Wasiu Olatubosun in Ibadan, indicated that the meeting was part of efforts to maintain a clean and healthy environment in Oyo State.

Earlier in his remark, the Commissioner for information, Hon. Wasiu Olatunbosun noted that government cannot make the state clean alone without involving all the Stakeholders, calling on them to support the Oyo State government in cleaning the state.

The Commissioner further said that the present administration means to make life bearable for residents of the state with the involvement of a consultant (Mottainai Recycling Limited) and make Oyo State clean and habitable with individual’s input.
“We have had this challenge of cleaning the city. We just thought that as we continue the process of keeping the city clean, we should engage the stakeholders as well”, Oni said.

“This is a new initiative that we introduced: a zero budget initiative. The people should expect a clean environment, while we also target a waste to wealth initiative”, he added.

He said the Government is strategising, such that the Traders will pay a little token to get their wastes cleared, therefore he urged them to cooperate with the consultant, in ensuring a healthy and clean environment.

He said the State government launched the Initiative, which resulted in the overhaul of the state’s solid waste management system.

“We must be able to challenge the people and communities who produce the majority of the waste to exercise greater responsibility in the disposal of their waste, while also exploring funding strategies to address the issues”, he said.

He said “we must be aware that we are all the recipients of personal deviations and that waste generated must be disposed of through the proper waste management channels”.

He said his firm is set to sort and buy wastes from waste creators and generators in the State.

Flooding and epidemics are caused by solid waste being dumped in various places. Therefore, it is more crucial than ever to ensure solid waste recycling.

Speaking, on behalf of Association of Local Government of Nigeria (ALGON), the Executive Chairman, Lagelu Local Government, Hon. Kazeem Gbadamosi commended the initiative, adding that the Consultant needs to work with Local Governments in the State.

He opined that waste management in the state ought to be a collective responsibility of all, urging residents to cooperate with the new consultant.

In her words, a Market leader, Chief Mrs. Labake Lawal enjoined the State Government to consider the reintroduction of the weekly and monthly environmental sanitation.

She equally expressed her concerns about the State’s waste management problems, adding that the Market leadership is ready to work with the State Government and the new consultant.

“Our State, like many other developing nations around the world, faces difficulties and inadequacies in waste management, which are particularly acute in Oyo State,” she said.

Oyo 2023: We’ve Not Supported Any, From The Trio Of Makinde, Folarin Nor Adelabu As Our Candidate — Oyo NURTW