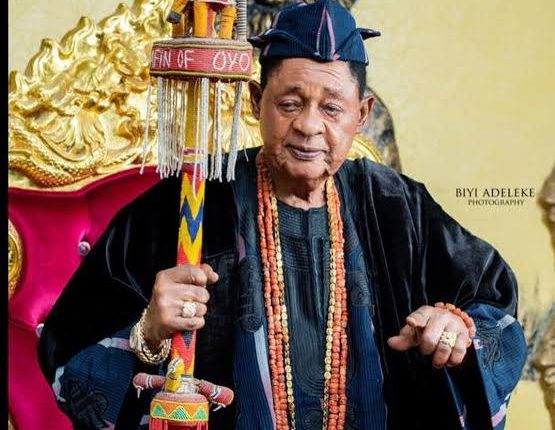 The Alaafin of Oyo Empire, Oba Lamidi Adeyemi III’s body was taken over by Sango believers of the Isese Faith after Islamic rites were performed in the morning.

(As per inside sources, the body used in the Islamic rites was an effigy. This is not confirmed.)

The “Body” of the Alaafin was then covered with a traditional Green cloth to mask the white islamic wrappings. The Traditionalists then formed a circle around the body.

They later asked mourners and journalists, to leave the hall. As the remains were carried, the devotees chanted dirges and eulogies of Orisa Sango, whom an Alaafin embodies, according to Yoruba Religion.

Traditional prayers, rituals, and sacrifices were held at night by adherents of the Yoruba Traditional Religion (Isese).

The body was subsequently escorted by the Onisese to an undisclosed location for burial.

The Alaafin was a staunch adherent of the Lord Sango and attended the Sango festival year on year.

Kabiyesi has become Ebora now having joined the pantheon in the Spirit world.

May the Orisa (Gods) welcome Kabiyesi in their arms. Ase Eledumare!

Watch the videos of the entire proceedings below: