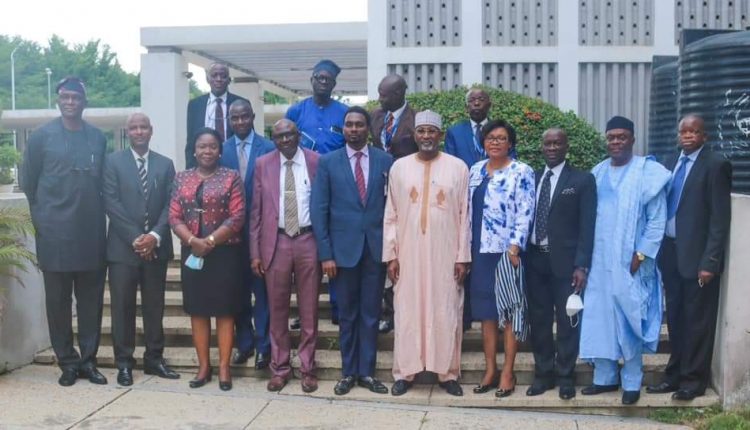 We Are Not In UI To Witch Hunt – Jega, Chairman Presidential Panel

The Chairman, 2021 Presidential Visitation Panel to the University of Ibadan, Prof. Attahiru Muhammadu Jega has assured the university community that the purpose of the panel was not to witch hunt the institution, but set out to interact with staff and students , evaluate and examine various challenges confronting the university.

Consequently, Prof. Jega said that the panel would make useful and significant recommendations to the government with a view to bringing about further development to the university, hence, soliciting the cooperation of the management, staff and students in carrying out the assignment.

While leading other members of the panel to pay a courtesy call on the Acting Vice Chancellor, Prof. Adebola Babatunde Ekanola and his management team, signaling the official commencement of the assignment, Prof. Jega observed that “a perception developed in the mind of some people when they hear that a visitation panel is around, thinking that the panel is out to witch hunt members of the university community. We are not here to witch hunt anybody”.

Rather, he said, “the mandate given to us is to interact with the staff and students, evaluate facilities, receive complaints, and make useful recommendations to the visitors with a view to bringing about more developments to the university”.

Promising to do the work with open mind and with all the seriousness it deserves, the former Vice Chancellor of Bayero University, Kano therefore urged all the stakeholders to cooperate with the panel in order to achieve the set objectives.

Responding, the UI Acting Vice Chancellor, Prof. Ekanola who disclosed that the panel was out to examine 29 items, hinted that the university had made adequate arrangements in order to simplify the panel’s assignments, expressing confidence that the university would benefit immensely from the wealth of wisdom of Prof. Jega.

Describing Prof. Jega as a seasoned university administrator, the UI boss who remarked that the panel’s work would create a new level of progress and achievements, insisted that the university community was excited as the exercise would make things better.

His words: “Prof Jega understands the university system intimately. This university will certain benefit from his knowledge more so when he is also not a stranger to the UI.

“In 2010, he delivered the University Advancement Center lecture and later the convocation lecture. We are going to benefit from his team’s reports as their recommendations will make things better”