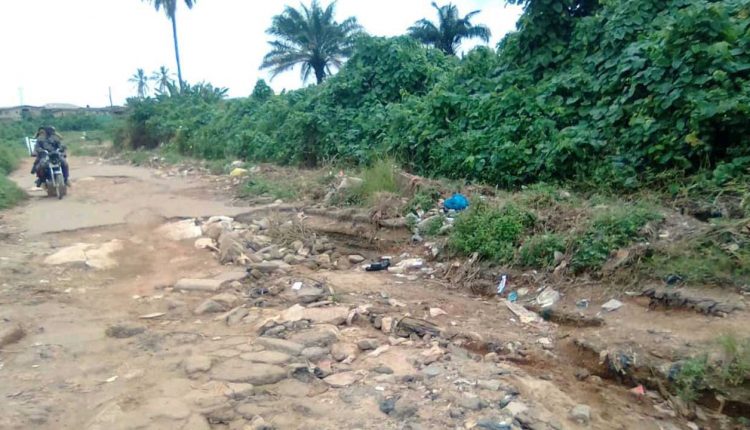 We Have Been Cut-Off, Molete Residents Cry Out Over Poor Roads In Ibadan

Bumpy rides, deep potholes, hilly paths and eroded portions are some defining features of the one- kilometre road, which connects Eyin Grammar Road to Adeyemo Layout in the Molete area of Ibadan.

The road links many streets in the neighbourhood with over 5,000 residents.

Daily, these residents went through hell and agony to reach their destinations in Bolaji Oladejo Street, Adeyemo Layout Molete.

Notwithstanding that the road leads to some notable edifices like Bishop B. F. Owa’s Mega Church-Adeyemo, the late Olubadan, Adeyemo Operinde 1 Heritage House, AMORC Monument and Building, the headquarters, Deeper Life Bible Church and Ayobami Group of Schools, the road has remained in a deplorable state for a long time.

The chief security officer of the area, Mr. Samson Adebusoye, who conducted The Guardian round the community, lamented that they have been cut off from other parts of the city because of its deplorable state.
According to him, the road was rehabilitated during the administration of former Governor Adebayo Alao –Akala, but gave way a few years after it was commissioned due to low work quality and lack of proper drainage system.

He also said the last government never did anything on it, adding that Governor Seyi Makinde, who promised to rehabilitate the road, was yet to fulfill his promise as the road is still in the state of disrepair.

Adebusoye stressed that members of the community, a couple of times, had cleared the blocked drainage.

“Recently, Pastor B. F. Owa’s church and some landlords in the area cleared the drainage and the bushy path with N100, 000. Though Baba Owa had a discussion with Governor Seyi Makinde about the road, I don’t think the government took it as a priority.”

Also, the immediate past chairman of the landlords’ association, Rev. Femi Popoola, who claimed to be living in the community for about 20 years ago, corroborated the chief security officer.

He said: “The road was bad when I came here in 20001. But we later had a discussion with the Alao-Akala administration to rehabilitate it and it was done. Unfortunately, when it was done, they did not do what they were supposed to do. The drainage system was not done properly. The width was narrow. If it is wide, it would have eased the drainage challenges.

“There is also a rock somewhere, which prevents the contractors from digging and constructing proper drainage. They were supposed to crush the rock, but they didn’t do that. As a result, the drainage got blocked and erosion spoiled the road. “The rain water from Osungbade also compounded the woes on the community.”

Poopola, a chartered accountant, said many residents have started packing out of the community as a result of the deplorable state of the road.

He stressed that residents who want to take the alternative road at Eyin Grammar are not doing so because it was too far and costs more.

He said: “We have a population of over 5, 000. This road leads to Adeyemo, Osungbade, Eyin Grammar and Odo -Oba. Traders lose their articles in the street. It makes our vehicles and motorcycles wear out easily. Also, many people have packed out of this area due to the state of the road. During the rainy season, motorcyclists find it difficult plying this area.

“You cannot enter this road in the night. If there are issues and you call security agents, they would not come to the community because of the deplorable state of the road. When they cannot come, robbers will have a field day. There was a time I called the police, they came down but they could not enter because of the road. So, we are facing a lot of problems because of this road.”

On why the government is slow to respond, he said those advising the government are misguiding them to focus only on the main roads instead of rural ones.

Poopola, who commended the government for building parks, urged the governor to give priority to the road and fix it without delay because the parks would be useless without good roads.

Also, the Chairman of Landlords Association of the community, Rev. Babajide Aina urged the government to fulfill its promise by repairing the road.
A commercial motorcyclist plying the community, Mr. Muri Bashir, said the poor state of the road is affecting their business and their take home.

He called for timely intervention on the road.

Also, a resident, Miss Darasimi Ogundeji, appealed to the government to repair the road.

But the Chief Press Secretary to Governor Seyi Makinde, Mr. Taiwo Adisa, said the road will be handled by the Ibadan South East Local Government because it fell within the purview of the local government.

But the Chairman of the council, Hon. Emmanuel Alawode, said the government is working on fixing the road.

He said: “The governor is working on it. We cannot jump the gun. Government will do it. Baba Owa is very important to us.”