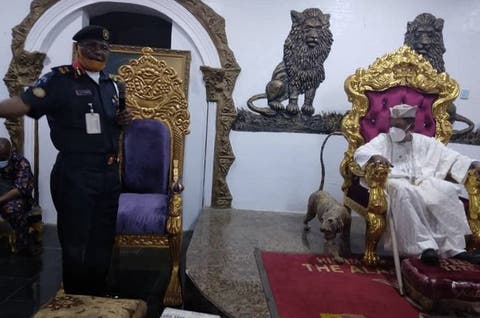 We Need Your Support To Curb Insecurity, NSCDC Commandant Appeals To Alaafin Of Oyo

The Commandant of the Nigeria Security and Civil Defence Corps (NSCDC) in Oyo State, Michael Adaralewa, has sought the support of the Alaafin of Oyo, Oba Lamidi Adeyemi, to strengthen the security being emplaced by his command.

The commandant made the appeal for support, on Tuesday, during a courtesy call on the traditional ruler in his palace.

Adaralewa, who said that his visit was to meet with all stakeholders involved in the security of lives and property in the state, also received royal blessings from Oba Adeyemi.

He thanked the royal father for the blessings and support to Oyo NSCDC, promising to work tirelessly to surpass the achievements of his predecessor, in order to bring sanity to the state.

“It’s our mandate to protect lives and property of the citizens of the state, and also to protect national assets of the Federal Republic of Nigeria,” the commandant stated.

Welcoming the commandant, Oba Adeyemi commended the civil defence corps for their professional conduct during the 2020 EndSARS protest in the state, as well as the activities of Agro Rangers in stemming the tide of criminality.

He expressed appreciation for the way the officers handle cases, encouraging them to do more.

“We are supporting Agro Rangers, and we will not relent in our efforts of giving the Corps timely information that will help in doing the job, because due to the type of work you are doing, your men are also prone to attacks by the criminals,” Oba Adeyemi said.

He also expressed the clamour for justice whenever a suspect is apprehended and handed over to any security agency in Nigeria.