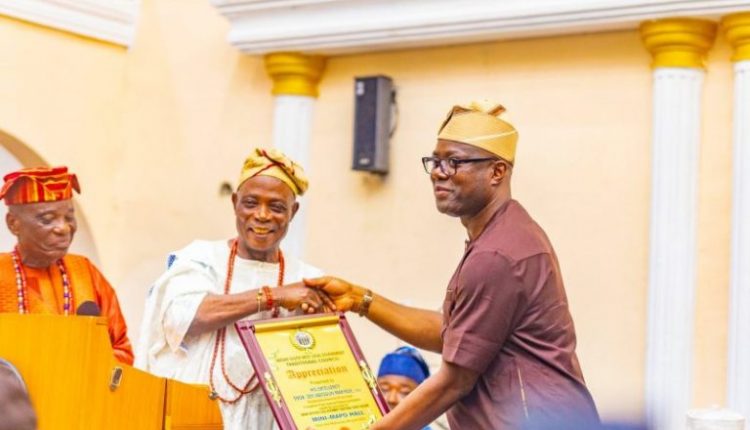 We Will Continue To Respect, Uphold Our Traditional System – Makinde

Oyo State Governor, ‘Seyi Makinde, has declared that his administration will continue to respect and uphold the traditional system in order to ensure harmonious relationships in the society.

Makinde, who stated this while commissioning an edifice christened mini-Mapo Hall, built by the Ibadan South-West Local Government Traditional Council headed by a former governor and Osi Olubadan of Ibadan, Senator Rashidi Ladoja, said that respect for the traditional system would ensure a cohesive society.

A statement by the Chief Press Secretary to the governor, Mr. Taiwo Adisa, indicated that the ceremony was held at the mini-Mapo Hall Premises, beside Alesinloye Market, Ibadan South West Local Government, Ibadan.

The statement quoted Makinde as explaining that his administration will continue to respect and uphold the traditional system in the state.
He commended the Ibadan South West Local Government Traditional Council Members led by the Osi Olubadan of Ibadan, Senator Ladoja, adding that the completion of the new Hall is a testament to the resilience and determination of the council members.

The governor added that traditional institutions are an integral part of the society, saying that his administration will continue to work with them to build a lasting legacy and achieve a cohesive society.

While speaking on the issue of insecurity in the country, the governor said that he would soon call for an expanded security council meeting, which will consist of the traditional rulers, to deliberate on the security situation and how to forestall the type of incident that happened in Owo, Ondo State.

He said: “I want to welcome you all to the commissioning of the mini-Mapo Hall. Two years ago, I had the honour of being part of the foundation-laying ceremony and I thank God that I am also here to commission it.

“At that time, little did we know that the world would face the COVID-19 pandemic, which would greatly affect the economies of all countries.

“So, if some people say that Seyi Makinde has never initiated a project and completed it, tell them this mini-Mapo Hall we are commissioning today, was started and completed by this administration.

“And I am happy that this is a historic project and the good news would be shared with generations to come. I really thank my father, Senator Ladoja, for the vision.

“It is a testament to the resilience and determination of our people here at Ibadan South West LG Traditional Council that, despite these challenges, this building is completed and being commissioned.

“If you pass through the road that leads to this venue, you can’t miss this venue. So, not only will this building beautify our landscape but also become a part of our history here in Ibadan and Oyo State. It is similar to Mapo Hall.

“I said it two years ago that our traditional institutions are an integral part of our society and we must continue to work with them to build a lasting legacy.

“I believe this is the time when ambitious politicians remember the traditional rulers and institutions. This is also the season. Those who have not come to pay homage to you for the past three years will visit you.

“Well, we are here today as a testament to a shift in that culture, because there is a cooperation between the government at the state level, local level, and our traditional institution.

“So, as a government, we will continue to respect and uphold our traditional system. I can promise you that as long as I remain the governor of Oyo State, this collaboration will continue.

“We will continue to draw on our traditional system and the roles they have been playing to ensure we have a cohesive society and uphold our culture.

“I was at Owo three days ago to commiserate with my colleague over the killing of worshippers at the St Francis Catholic Church, Owo. I told him that those who perpetrated the evil would have done reconnaissance and looked at the situation of the security around that area before they carried out the evil on that fateful day.

“We can get rid of terrible situations like this if only we collaborate with our traditional rulers. I am saying this because they are always in the know when strangers get to a particular environment because they are closer to the people than the government.

“I told him I would summon an expanded security council meeting and invite our traditional system to deliberate on the security situation and how to forestall the type of incident, which happened at Owo.

“Each time you hold a meeting in this hall, let us remember those who worked to make it a reality. So, I am very happy today that the Mini Mapo Hall has been commissioned for the glory of God and for the benefit of the good people of Oyo State.”

Speaking at the event, the former governor and Osi Olubadan of Ibadan, Senator Ladoja, said that the project would not have been possible without the support of Governor Makinde- led administration in the state, adding that when the governor came to lay the foundation, he gave 60 percent of the money used to build the Hall.

According to him, “this project would not have been possible without the support of the government. When Governor Makinde came to lay the foundation, little did he know we were trying to set a trap.

The foundation of the building was laid in February 2020 just before the COVID-19 pandemic.

“When we estimated how much it would cost, we thought it would be around N100 million, but it eventually cost N160 million, and the governor had already given us 60 per cent of the N100 million.

” So, Your Excellency, thank you very much for the support you have given us so far.”

In his remarks, the Project Manager and member of the Council, Chief Taiwo Oyekan, who designed the building and supervised its construction, commended Ladoja for the vision of the project.

He said the project was built largely with the savings of the traditional council, stipends, and allowances.

The commissioning had in attendance the Olubadan of Ibadanland, Oba (Dr) Lekan Balogun, who was represented by Asipa Olubadan, High Chief Eddy Oyewole, members of the Olubadan-in-Council, the 11 local government chairmen in Ibadan, political functionaries, top government officials, and other guests.