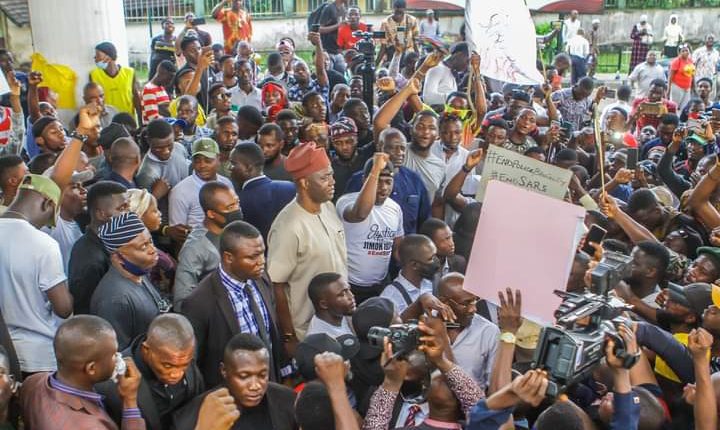 We Will Release Arrested Protesters Without Being Charged—Makinde Assures Protesters

Governor Makinde has assured the #EndSARS Protest that he would unleash his credible power to ensure that all protesters who were arrested during will be released any legal process or proceedings.

The Governor stated that after his briefing with the protesters at the State Secretariat Today, Tuesday 13th of October.

The statement”Today, we visited Ogbomoso to see the families of three of our children who died during the End SARS protests. We began the process of compensating the families for the losses they suffered and promised to do more in the coming days.

Our hearts go out to all those who have suffered directly and indirectly during these protests. As a government, we will not forget the last few days in a hurry nor the needless deaths of Isiaka Jimoh, Ganiyu Moshood Alabi, and Adeoye Taiwo.

We were also at the Palace of Kabiyesi, Oba Oladunni Oyewumi Ajagungbade III, the Soun of Ogbomoso. We pledged the sum of N100 Million to begin immediate repairs of the palace and replacement of destroyed properties.

We told Kabiyesi not to hold what has happened against our children. Although regretted, all that took place was a result of the years of failure of governance which we are working to correct. We accepted Kabiyesi’s prayers for a better Nigeria and a better Oyo State.

We returned to the secretariat in Ibadan to speak with our other children who had been waiting all day. We reassured them that these protests are a wake-up call to all. We pledged to do better to meet the needs of young people, especially for employment and a safer environment.

I informed them that our Attorney General and Commissioner for Justice, Professor Oyelowo Oyewo, would work with the Commissioner of Police in Oyo State to ensure that all those who were arrested during the End SARS protests are released without being charged.

Soun’s Palace Attack: Sen Lanlehin Apologises On Behalf of Perpetrators, says it’s One price to Pay As a Leader