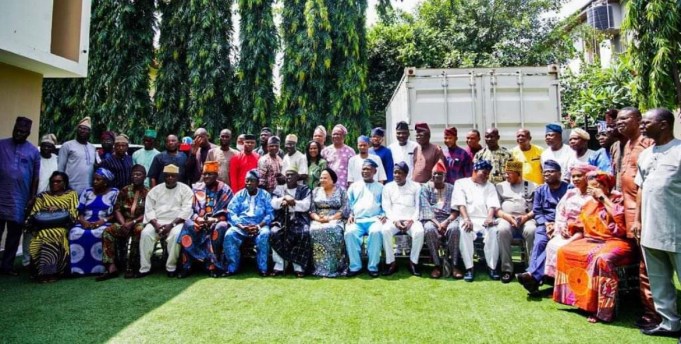 The crisis rocking the All Progressives Congress (APC) in Oyo State may be over soon if the gladiators that factionalised the party into two keep the promises they made at a peace meeting held on Thursday.

The peace meeting was convened by Mrs. Florence Ajimobi, wife of a former two-term governor of the state, the late Senator Abiola Ajimobi, at the Oluyole Estate residence of the Ajimobis.

The aggrieved faction was led to the meeting by Senator Ayoade Adeseun, who represented Oyo Central in the National Assembly from 2011 to 2015 while the other faction was also led to the peace meeting by the chairman, Isaac Omodewu.

Briefing journalists at the end of the meeting, Senator Adeseun said: “Today, her excellency, Dr. Florence Ajimobi, the wife of our departed leader, summoned the whole all of us to see how we can work together and find a way out of the quagmires. Of course, we are aware that the national is working on this, but whatever the decision they came up with, we need to seek for the cooperation of every single person of the party at all levels, from the ward to local government and to the state, for us to succeed in our singular onerous target of ensuring that come 2023, the Seyi Makinde’s administration is put to an end.

“We don’t want this state in the hand of character of this fellow anymore. We have resolved that God’s willing, we are going to work together. The problem we are having has to do with the process that was very faulty, which will be revisited. We have to make necessary adjustments to ensure that we unitedly focus on our challenges. We appreciate the wife of our leader for deeming it fit to bring us all back to the Abiola Ajimobi’s family get together.

“Though the challenges are still there, I don’t want anyone to misread what we are doing here today. We are going to set up a committee that is going to delve into the issues that are at hand, make necessary adjustments and come up with unified party. All we are saying is that we want arrangements that all of us can work together. With give and take tripod, we are going to resolve all the issues.

The factional chairman, Omodewu also stated: “I want to appreciate our mother, the wife of our former governor and all my leaders here today. I can only say we are here to reconcile all members of our party in the state. As the state chairman, I will appreciate if the two factions can come together as one, so as for us to send the current maladministration of Seyi Makinde away from the office in 2023. I can assure you that the resolution will favour everyone in the party.”

In the same vein, Mrs. Florence Ajimobi, told newsmen: “For me, this is a holy month; Muslims are fasting and Christians are also fasting. Most important thing in the holy Quran and the Bible is love . If we love one and another, there will be peace. For me, we have come together as a family in the house of our leader, Late Senator Abiola Ajimobi, to resolve the issues. Like we agreed at the meeting, there were faulty processes and we are going to come together to resolve it.