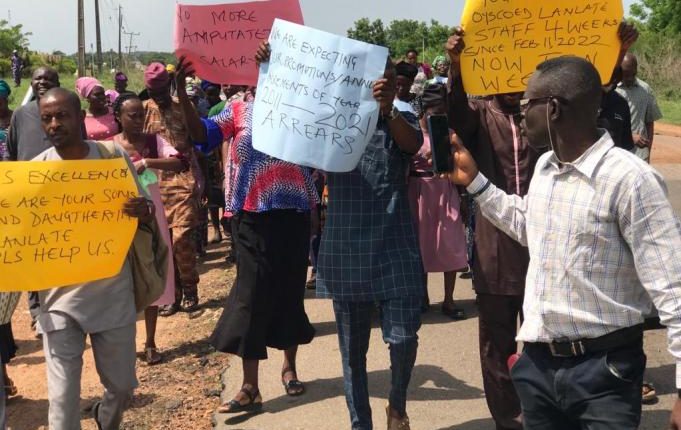 Worried by their dwindling welfare and poor economic conditions occasioned by the non-payment of their outstanding emoluments, members of staff of the Oyo State College of Education, Lanlate, belonging to the Non-Academic Staff Union of Educational and Associated Institutions (NASU), have appealed to the Oyo State Governor, Engr. Seyi Makinde, to come to the institution’s aid, urgently.

Highlighting their grievances to include the defrayment of a backlog of promotion arrears from 2011 to 2021, payment of 12 months differential on the consequential adjustment to the new minimum wage, 16 months hazard and medical allowances, as well as the balance of February and March 2022 salaries, having received an amputated 80.8%, the workers called for the restoration of full salaries to 100%.

With placards bearing inscriptions like “OYSCOED staff are suffering in silence”, “no more amputated salary”, “Oyo State Government please don’t neglect us”, “Increase our subvention”, “State Govt, you promised OYSCOED Lanlate Staff 4 weeks since February 11, 2022, NOW TEN WEEKS”, amidst other tearful submissions, the workers called for an implementation of the College’s 2022 personnel budget, which they believed catered for majority of their demands.

In her remarks, the Chairperson, Comrade Adeola recalled that: “His Excellency was here on Friday, 11 February, 2022, and we tabled our requests before him. We remember him telling us he won’t play politics with our issues, but will attend to same within 4 weeks. He walked round the College, saw our suffering and the depth of our plight, but till date, nothing has changed.”

In emotionally-laden voices, the seemingly exasperated workers called on the Oyo State governor to take special interest in the cause of their College, and help save it from imminent collapse. “Funding for infrastructure and payment of emoluments are our major challenges, only government’s attention can salvage the situation,” she added.

Representing the Ag. Provost, Mr. M. O. Falade, the Ag. Librarian, Mr. I. T. Busari, commended the workers for the peaceful approach adopted in pressing home their demands, expressing optimism that the demands would be met before the 7 days’ ultimatum lapses.

“A meeting has been scheduled for today (Wednesday, 20 April, 2022) in Ibadan by the Honourable Commissioner for Education, Science and Technology, with staff unions, and I know the issues to be discussed are same as those you’ve raised here. I just want to appeal to you to let us exhaust this ultimatum before any industrial action is taken,” he added.

It is to be recalled that the Oyo State Governor had visited the College on Friday, 11 February, 2022, wherein he promised wholesale solution to staff demands, latest 4 weeks of his visit, as well as the release of the sum of N100M in two tranches as a special intervention, as well as N36M 2022 capital grant, available evidence showed that while the governor had approved the first tranche of the intervention grant and the 2022 capital grant, though it could not be ascertained whether or not the College had been credited, staff outstanding emoluments (which formed the heart of the workers’ agitations), promised within 4 weeks of His Excellency’s visit, have not been approved, let alone paid, 10 weeks after!