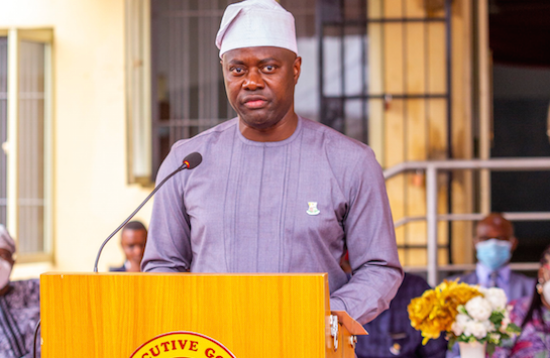 Who Will Save Seyi Makinde from APC Propagandists|Seye Eyitayo

A few days ago, I saw a video on WhatsApp being circulated by supporters of the opposition party, the All ProgressivesCongress (APC), about the Governor Seyi Makinde led administration in Oyo State. In this piece, I address the claims made in that video.

This is an outright lie. The Oyo State Government entered into a PPP arrangement with Awa Bike Nigeria, a bike–sharing and lifestyle start-up, to run a pilot project at the Oyo State Secretariat, Agodi, Ibadan. The bicycle–sharing scheme,which is run by Awa Bike Nigeria, is being piloted is to runfor 3 months. The ggovernment paid N750,000 in total for the pilot scheme. That is N250,000 a month for renting 60 bikes within a month.

i•✓ Maize importation to Botswana(Botswana Maize)

i) Both Governor Seyi Makinde, during his media chat on February 20, 2021, and his Executive Adviser on Agribusiness and DG of the Oyo State Agribusiness Development Agency (OYSADA), Dr Debo Akande,have responded to the issue surrounding maize exportation.

They gave two reasons: First, upon assuming office, the government decided to focus on agro-processing of agricultural produce rather than the export of raw produce.

This decision was made to boost the economy of the state. Secondly, the maize produced in Oyo State does not meet export standards. The administration is working towards producing maize varieties that do.

ii) On the second claim, Governor Makinde explained that the commencement of work on the farm estates was slowed down by the bureaucracy surrounding the release of the loan by CBN. Preliminary work commenced on the Akufo, Eruwa and Fasola farm settlements (now agribusiness industrial hubs) since Q3 2020. The construction began in March 2021.

Promised to not borrow but has borrowed 42.5bn already,total debt incurres would have been 142.5bn if not that the bond (prosperity bond of 100bn) was blocked by the FG.”

There is no evidence that Governor Seyi Makinde promisednot to borrow money. What Makinde said was that borrowing should be for capital projects not recurrent expenditure. There is also no evidence that the proposed N100B Oyo Prosperity Bond was ‘blocked by the FG.’

i•✓ Destroyed the effective and working security architecture that ensured interrupted peace and security for 8 years.

ii•✓ Wanton killings and kidnapping in the Ibarapa zone of the state.

V•✓ Increased rate of insecurity in the state.”

i) The security architecture was improved rather than destroyed by the current administration. The state government is continuously equipping the police, ‘Operation Burst’ and Amotekun to fight crime. Furthermore, it is untrue that Oyo State had uninterrupted peace for 8 years. Several incidents over these 8 years highlight insecurity in Oyo State.

For instance, in February 2018, the Oyo State House of Assembly called on then-Governor Abiola Ajimobi to equip and empower vigilante groups to tackle the menace of herdsmen attacks. Another example is the Bodija market incident of June 2018, where a shootout between butchers and the police left 5 dead.

Citizensshould demand improved security from the current administration without telling unnecessary lies about the past.

ii) Killings and kidnapping have been ongoing in Ibarapaland unchecked for over a decade. This is the first administration that is doing something tangible and sustainable to address the security situation in that axis and bring lasting peace by operationalising Amotekun to deal with the issue. Senator Ajimobi’s solution was to waste state funds to embark on a trip to Denmark to learn about ranching when faced with this same issue.

iii) This story of cannibalism which is to havehappened after the End SARS protests were hijacked by hoodlums who lynched 2 policemen remains unverified.

The current administration’s recently announced voluntary policing initiative should go a long way to address this security issue and prevent it from degenerating into what happened under the previous administration.v) On the contrary, reports show that crime rate is reducing in Oyo State. As an example, this report from the police shows that armed robbery incidents in Oyo State reduced to 123 in 2020 compared to 182 in 2019.

The PMS was set up over a year ago but till date, the government has not come out to tell the public how much the state has generated from the system.”

The Charge – The current administration has run a moretransparent government than what obtained in the past.

After the cancellation of the 3,000 levy paid by students in public secondary school, he promised to fund schools but investigation show that schools are not getting grands and as such lack the basic materials to teach students.”

The Truth – Schools have been receiving running grants.However, the government needs to ensure that the grants are disbursed on time so that the schools’ expenses can be covered throughout the term.

The APC in Oyo State needs to go back to the drawing board and explain clearly why they are the best choice in the next elections. Lies, half-truths, and distortion of recent history will not be enough to convince Oyo State people to go back to what they very outrightly rejected in 2019.

How E-Governance Is Helping Us Transform Oyo – Makinde