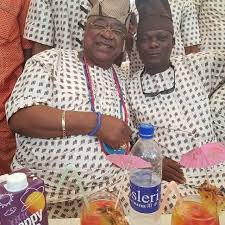 Why Akala, Folarin’s Antecedents ‘May’ Stop Ladoja From Joining APC

Political leaders in Oyo State are not given to retiring even when the ovation is loudest. It is not surprising that as the 2023 general elections approach, three serving governors under the platform of the All Progressives Congress (APC) on Sunday afternoon visited the Ibadan residence of former Governor of Oyo State, Senator Rashidi Ladoja.

They were ushered into the Ondo street residence of the Ibadan high chief by APC Senator, AbdulFatai Buhari, Oloye Sharafadeen Alli, Hon. Bimbo Adepoju and others.
Though details of what they discussed were still sketchy as at press time but it was gathered that the meeting was in a bid to lure the highly respected politician to the ruling APC.

The meeting which took place behind closed doors, held between 1:35 and 2:29 pm.

It could be recalled that the party had lost the state to the PDP in the 2019 governorship election after the APC had ruled for 8 years. They, however, declined comments after the meeting.

Since the last Sunday visit by the APC Governors, the political space in Oyo State has been filled with rumours that a former governor of the state, Senator Rashidi Ladoja contemplates heading to the APC fold.

1) Will Ladoja and Akala work together?

An APC stalwart in Oyo South Senatorial District who spoke with GOALPOACHER NEWS on condition of anonymity said whenever there are reports that Ladoja and his erstwhile deputy, Alao Akala have agreed to work together in the same political party, there are avalanche of scepticism that the two non – identical twins were parallel lines that could not meet.

Should Senator Ladoja agrees to join the APC, will he play second fiddle to Alao Akala in the APC? Has Ladoja forgiven Akala on the rumoured roles he played to oust his principal from office in 2005? Did the two gladiators shift grounds to work together in 2015? What happened between the duo when Akala initiated coalition moves to dislodge the APC in 2019 in which Akala made a u-turn and supported APC after he sworn at Fresh FM that he could bet his life that APC will never rule in Oyo again, did he stick to words? The source said.

While speaking on Fresh FM two days to the 2019 gubernatorial elections in which the candidates of ZLP, ADC, SDP and Ladoja publicly endorsed Engineer Seyi Makinde as the coalition candidate, Senator Ladoja described Alao Akala as a political merchandise who loves trading the votes of Ogbomoso residents for self aggrandizement. Will Ladoja and Akala work together in the same party again? Be the judge.

Teslim used to be a bitter political adversary to Senator Ladoja and Alao Akala and was incarcerated as a suspect in the killing of former NURTW leader, Lateef Salako aka Eleweomo. It was the court that came to his rescue. It was reported that in the media that Folarin hindered the defection of Ladoja to PDP in 2014 to become the party’s candidate in the 2015 gubernatorial election. During the governorship debate organized by Splash FM in 2015, the candidate of APC, late Abiola said Teslim Folarin was among those who facilitated the impeachment of Senator Ladoja in Abuja, Ladoja in his response said Folarin didn’t impeach him but failed to speak further.

Recall that most PDP gladiators in Oyo State worked against Teslim Folarin in 2015 but supported Accord Party in the election while the PDP had it worst ever results in Oyo State. Ladoja had revealed that Folarin told him that “ati jagba lowo Akala” we have hijacked PDP structure from Akala.

Will Ladoja, Akala, Teslim work together in the same party? Will they be able to manage their interests and egos? Will the National leadership of the APC hand over APC structure to Ladoja if he decided to pitch his tent with the party? Will the LAMIST, SENACO and other splinter core progressives groups adopt the sit down look and watch all PDP members in the APC hijack the party from them?