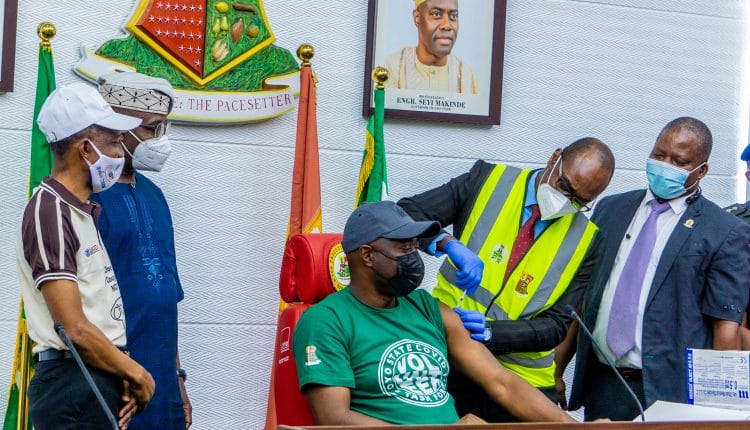 Executive Secretary, Oyo State Primary Healthcare Board, Dr Muideen Olatunji who administered the vaccine to the governor said recipients of the jab were only likely to have mild reactions.

After receiving the vaccine, Makinde said he ordered that a sterility test be done on the vaccines received because he wanted to be sure that the AstraZeneca which came from India was properly handled and well preserved till it got to the state.

Makinde said, “When I was reading the newspaper this morning, I saw that Oyo State has not given a single shot of the vaccine and zero was recorded for the state. Now, we, at least, have one for the State. And for States that have taken in their thousands, and are ahead, we will surely overtake them.

“Yes, I ordered for sterility test. Some people, even those close to me, were shading me on social media. Even though I said I have a low tolerance for physical pain, I have a high tolerance for emotional pain.

“We did the test because when I asked questions about the origin of the vaccine, they said the batch sent to Nigeria came from India. It’s not that I don’t like India or don’t believe in their product, but was concerned about the handling.

“They said the vaccine should be stored at a particular temperature. I wanted to validate the vaccines that we will give to the people of Oyo State have been correctly handled. And we felt our two labs here, the Virology and Biorepository labs in the University College Hospital, Ibadan, and they came with the same result that the vaccine is good and proper for the people of the State, it didn’t take me 24hours to accept and agree to come for this vaccination exercise.”

Earlier, state Commissioner for Health, Dr Bashir Bello stated the result of the sterility test done by the state government at the virology and biorepository lab at the University College Hospital (UCH), Ibadan, confirmed that the vaccine received is free of any form of micro bacteria, fungi and is strictly for COVID-19.

The state had on March 10 received 127,740 doses of the vaccine from the federal government but subjected the vaccine to sterility test.

In his own remarks, Executive Secretary, Oyo State Primary Healthcare Board, Dr Muideen Olatunji said the time from March 10 also afforded the state an opportunity to train health workers at the local government level on how to efficiently administer and handle the vaccine.

Olatunji added that after the first jab, there will be the administration of the second jab in weeks to come.

In order of priority, health workers will receive the vaccine first followed by the most vulnerable people above 50years, then people above 18 years and finally those that have missed, not captured and without any ailment but above 18years.