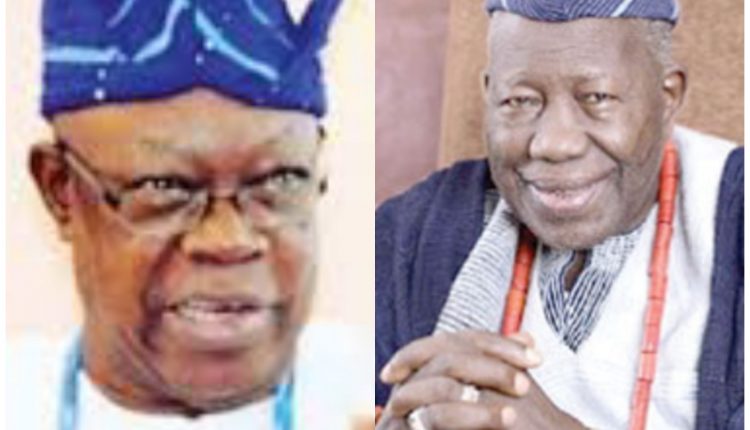 Why Ibadan May Not have Olubadan Anytime Soon

In what might be termed as royal rumble is about to take place as crisis brewing over who the next Olubadan of Land would be after the demise of Oba Saliu Adetunji bearly 48 hours Akéde Ọ̀yọ́ report.

Families, friends and well wishers have troop out en masse to the next in line and most senior chief in the Olubadan-in-Council, a former Senator of the federal republic of Nigeria, who Represented Oyo Central from 1999-2003, Senator Lekan Balogun drumming support and congratulating the Ibadan high chief.

However a public out cry might soon take place as an Ibadan born lawyer Michael Lana, had taken legal actions against the installation of high Chief Lekan Balogun as the next Olubadan of Ibadan land, A copy of the letter which was written to the state government, was sighted by our Source.

Micheal Lana cited various legal infractions that reportedly means the vacant seat of the Olubadan can’t be filled by Lekan Balogun, except the cases he filled against the state government are withdrawn

May I frstly, commiserate with you on the demise of His Royal Majesty, Oba Saliu Adetunji, Aje Ogunguniso 1. the Olubadan of Ibadanland. May his soul rest in peace
Secondly, may l humbly draw your attention to a traditional aberration and illegality that may occur in an attempt to install another Olubadan of Ibadanland, in view of the existence of Suit No.!/22/2020 HRM OBA
(SENATOR) LEKAN BALOGUN & ORS V GOVERNOR OF OYO STATE & ORS

Kindly note, Your Excellency, that your predecessor in office, without thinking of the legal effects of his actions on the future of Ibadan traditional institution, conferred the title of baship on some High Chlefs and Baales and gave them.

The right to wear beaded Crowns and coronets, in 2017. This action was challenged in Suit No. M317/2017-HIGH CHIEF RASHIDI LADOJA THE GOVERNOR OF OYO STATE. The High Court per Aiki 1. nullified the said conferment, which was actually a total contravention of both the Chiefs Law and the Ibadan chieftaincy customary law.

However, the Court of Appeal. In Appeal No.CA/1B/99/2018 set aside the
said Judgment of Aikil on technical grounds without touching on the merit of the case and sent the case back for retrial.

Upon your Excellency’s assumption of office, it was resolved that the matter the settled amicably and same was settled through the instrumentality of a Terms of Settlement which became the judgment of the Court. The said Terms of Settlement recognised the illegality of the said actions and therefore set aside the Gazettes by which the said Chiefs became Obas with a right to wear beaded Crowns and coronets.

These High Chiefs and Baules, were dissatisfied with this Consent Judgment and therefore Instituted two separate suits to set aside the Consent judgment while at the same time clinging to the title of Obasſ which actually is in contempt of court). Un of these cases is Suit No: Suit No.1/22/2020-HRM OBA (SENATOR) LEKAN BALOGUN & ORS V GOVERNOR OF OYO STATE & ORS Now, may I draw your Excellency’s attention to the fact that in committing this aberration which changed the Ibadan Chieftaincy customary law, the Olubadan Chieftaincy Declaration of 1957 was not amended and therefore remians extant. Under that Declaration and all relevant laws, no Oba can ascend to the throne of Olubadan. In other words, as long as the High Chiefs still cling to the title of Oba, they cannot ascend to that throne and any installation of any of them during the pendency of that suit, is illegal, null and void.

In the entire history of Ibadanland, we have never had such a situation where the legality or otherwise of the installation of the Olubadan would be an issue and this was what your predecessor did not take into consideration before Venturing into an illegal journey ibadan Chieftaincy elevation had always been smooth and without any rancour to the envy of all other towns It is in line with this legal situation that advice, most humbly, that you should withhold any approval of any High Chiel to become the Olubadan so that you will not also join in the desecration of Ibadan Chieftaincy Customary law.

There are only two ways to deal with this situation: one is for the High Chiefs to withdraw the aforementioned cases and the other is to wait for the Court to pronounce on it before any step is taken to Instalan Olubadan. If the court bolds that they have the right to be Obas and entitled to wear beaded crowns, then they are perpetually barred from becoming another Oba Nowhere in the customary law of any Yoruba town is an Oba elevated to become another Oba.

If on the other hand, the Court holds that the Terms of Settlement stands, and their obaship title is illegal then they are free to be elevated to the post of Olubadan. The ball, your Excellency, is in their court:
I wish you well as you consider, as an Ibadan man and as Governor, your place in history.