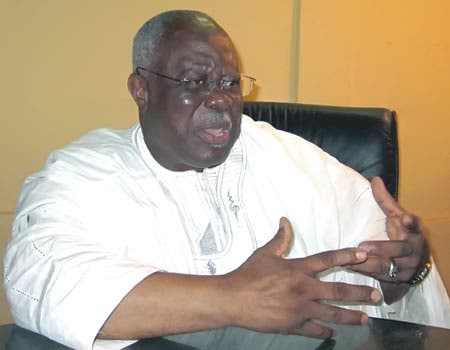 Why Oyo/Osun Zone Should Not Produce PDP Chairman —Olabode George

According to him, both Osun and Oyo states fall within the pairing of states in the southwest by the PDP on the rotation of elective party offices.

Under the arrangement, he said zone one comprises Ogun and Lagos; zone two is made up of Oyo and Osun, while zone three consists of Ekiti and Ondo.

He said Osun State could not field a candidate for the post of national chairman since Oyo has already produced the national vice chairman in person of Alhaji Taofeek Arapaja.

He said anything short of adhering to the arrangement would only throw PDP into further crisis, stating that the failure to observe the rule precipitated the crisis that raged even after Prince Uche Secondus became national chairman in 2018.

He also knocked out Ondo and Ekiti from the race since the immediate past national vice chairman (Southwest), Chief Eddy Olafeso and the current national treasurer, Aribisala Adewale hail from Ondo and Ekiti states respectively.

He said only Lagos State was qualified under the micro-zoning arrangement to field candidate for the office as the current deputy national chairman (south) of PDP, who is the acting national chairman, Elder Yemi Akinwonmi, following a court order against Secondus, hails from Ogun state.

As the two leading political parties weigh options to confront the zoning issue, some key members of the ad-hoc committees set by the Peoples Democratic Party (PDP) are reportedly under intense pressure from influential members to do their bidding.

According to sources, some powerful elements in the party are said to be piling pressure on some key members of the zoning committee to have a rethink on their position that the status quo ante should remain.

The targets of the lobbyists are said to be mostly members of the team from the southern part of the country, who believe the post of national chairman should go to the South-West.

But there was no indication at press time on Sunday that such individuals have caved in to the wishes of the lobbyists.

“Let’s Unite To Save Nigeria from Disintegration” – Alaafin Charges Nigerians