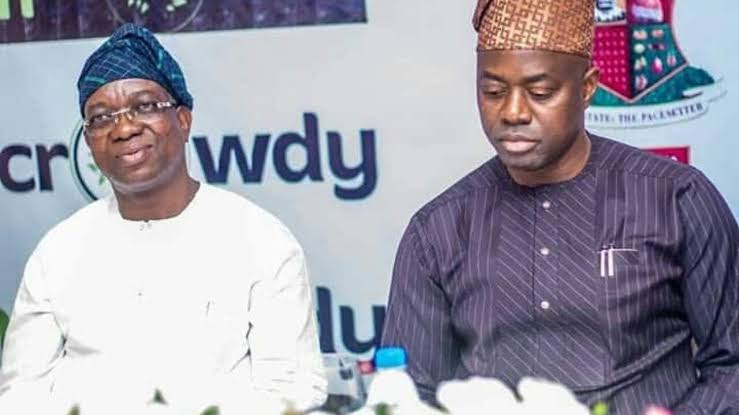 The three years political marriage between the Oyo state governor, Engr. Seyi Makinde and his deputy Engr. Rauf Olaniyan recently suffered a serious setback as the governor had finally picked Bayo Lawal, a commissioner in the cabinet of former Governor Adebayo Alao-Akala, as his running mate to seek re-election in 2023.

Though, the duo had kept sealed lips on the alleged rift between them, the fact that since the early time of their election in 2019 the governor seldom allowed his deputy to represent him at state functions when he was unable to attend gives credence to the rumoured frosty relationship.

The two came together to contest for the 2019 governorship election after about five political party formed a coalition to dislodge the ruling All Progressive Party (APC) in the state. Olaniyan who was the governorship aspirant of the African Democratic Congress ADC, became the running mate to Makinde of the Peoples Democratic Party (PDP) under which they both ran. The coalition was midwifed by a former governor of the state, Senator Rashid Ladoja.

The genesis of the crisis between Makinde, a native of Ibadan and Olaniyan who hails from Igboho area of Oke Ogun was traced to the political differences and internal acrimony between them which had started about a year after they were sworn in. They had engaged in a cold war ever since and have kept the public guessing about the silent war until recently when Olaniyan defected from PDP to join APC.

The state House of Assembly has also instituted an impeachment process against the deputy governor, raising five allegations to back their decision. The allegations in the petition entitled, “Petition And Notice of Allegations of the Deputy Governor of Oyo state, His Excellency Engr. Rauf Olaniyan,” include Gross misconduct Abuse of office, Financial recklessness ,Abandonment of office and official duty, insubordination.

Before things got messy, the duo have at different times engaged in accusation and counter-accusations, and have refused to come together and settle their differences.

Yet, there were insinuations within the governor’s camp that the since he became the number citizen in the state, Olaniyan has failed to integrate properly the PDP and Makinde’s political agenda in the Oke Ogun zone which, in effect, has denied the party new converts from the zone.

When announcing his defection to the APC, Olaniyan noted that he remained the deputy governor, insisting that he holds the governor and his new running mate in high esteem. Despite the threat of impeachment from the state’s legislative arm, he said he is at peace with his boss.