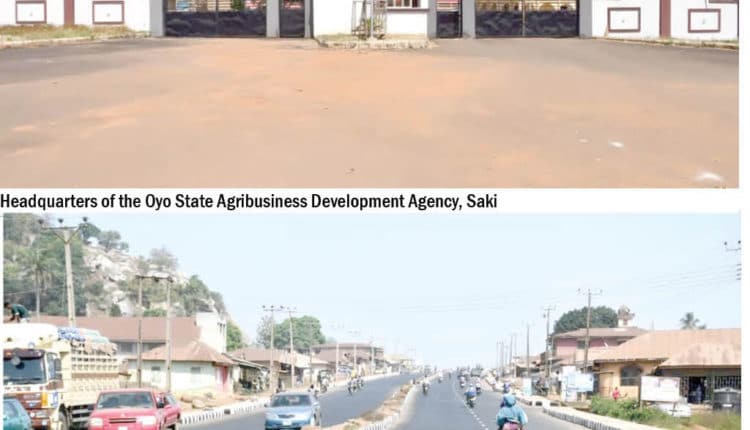 For residents and indigenes of Saki, these are the best of times. With the thoroughly revamped Oyo State Agricultural Development Programme (OYSADEP) which now bears Oyo State Agribusiness Development Agency (OYSADA) with its headquarters in Saki, and a newly constructed Saki township road, it is a new lease on life for residents. The Oyo State government had re-awarded the 9.7km Saki township road. Governor Seyi Makinde had on September 9, announced the revocation of the project from the contractor with a promise that the contract would be re-awarded to a more competent contractor within four weeks.

“To speak on the ongoing projects here, past governments spent years and what did our people benefit from those years? Instead, they were rather exposed to a lot of dangers on our roads. Infrastructure-wise, nothing was done but we thank God that Governor Makinde is opening a dual-carriageway in this township. Though a lot of structures have been pulled down because of this project, we appreciate it because there is no gain when you feel no pain. We need it.

“Saki West local government is no longer a village but a city. When governor Makinde came here for his electioneering campaign, we tried as much as possible to convince our people that he would perform better but some found it difficult to believe. Some even said that he would complete some of the projects that were started by the former governor. They were not expecting continuity but we were calmed when the governor himself promised that the dual-carriageway would be completed within a period of two years of his administration, and we thank God that it is being achieved today.

“When he also promised that he would resuscitate the Oyo State Agricultural Development Programme (OYSADEP), many said it was impossible but we have it today. He also promised that sporting activities would be developed and the abandoned stadium would be fixed and upgraded to a modern one. The people felt he was just promising heaven and earth but he is doing it. He has removed us from the bondage we used to be in. So, He has done a lot in the four cardinal areas, which his administration is resting upon.’’

Speaking in the same vein, Dr Lukman Adisa, Special Assistant to the Oyo State governor on Federal Constituency Matters stated that “For me, we will be expecting the long-term effect of what the governor has done. We are expecting a boom in the market in the long run. This is an agrarian society and he has done a lot to promote the agricultural sector by taking a lot of our youths to Adamawa for training.

«The multiplier effect of this training means that, in the nearest future, we are expecting a big market for farmers. And if that is being put into consideration, we must put in place facilities that will protect the market in terms of security, good road network and other infrastructure. So, those are the areas I expect the government should look into.

“At this point, I want to urge the government at the centre to imbibe the culture of maintenance, which Governor Makinde is displaying in Oyo State. They need to look inwards and how to manage the little resources we have in this country. If Governor Makinde can look at the available resources in this state, manage them, put them together to better the lives of Oyo residents, I don’t see why the Federal Government cannot do the same. That is why we need a good manager at the center there. The governor is paying salaries of workers, gratuity as and when due without any magic.

“In any case, we have never had it good like this in the history of Oyo State where the governor will come to Saki to celebrate with us and take almost all his cabinet members along. Invariably, he has pronounced here as the second capital of Oyo State. We have where to host him as he has provided the governor’s lodge. He has also promised to give us a presidential lodge. So, we have everything to host government, either state or federal.”

National President of Saki Parapo, Adejumobi Adedayo thanked the governor for improving the quality of lives of Saki people. “I want to appreciate the present government because we have never had it so good. Apart from the time of late Bola Ige and Lam Adesina, other previous governments neglected this area in terms of infrastructure, education, health and other social amenities.

“Before the governor came into power, there were so many abandoned projects. Look at the township stadium, which had been like that since the time of Lam Adesina. Look at the former OYSADEP, which is now OYSADA. Our school situation was also worst. But immediately Governor Makinde came to power, he has been fulfilling his promises in the aspect of education and other areas. On health, our former state hospital has been upgraded to a specialist hospital and well-staffed,» he stated.

Michael Adeogun, a resident of Saki, commended the state government for the ongoing developments in the area. “I am truly glad. Today, Saki is making progress. The newly constructed township road has started positively impacting our lives. Economically, people have started feeling the impacts. Also, we are glad that the government has made Saki the headquarters of the Oyo State Agribusiness Development Agency. This has improved investments in agriculture and has reflected in the provision of jobs and opportunities.”

For Mrs. Folasade Temidire, “the present government has made it its priority to better our lives in Saki. It is now very easy to move from Saki to Ibadan in about three hours. We are so happy and grateful. We are looking forward to more improvements in our area. What past governments failed to do, this government has done it. We are very happy.”

In his submission, Muhammed Rauf called on other state governors to emulate Governor Makinde. “It is with delight that I call on other governors to make the welfare of their citizens the first on their priority list. Saki today is a delight to behold. We are very happy and grateful. This is how a state should be governed where every section is recognised and their needs addressed. If previous administrations had done what this government has done, obviously Governor Makinde would have improved on what he met on ground by addressing other needs. Today, we are happy, delighted and grateful,” he said.

Olajide Olaniyi, Deputy Director, Administration and Supply, OYSADA, while speaking with Nigerian Tribune stated that the revamping of the agency has begun to witness the desired results. “When this governor came on board and the vision was given to him that this place needs to be changed for better. It was then that changes started; remarkable changes. OYSADA has seen deliberate improvement in youth development. There was a youth programme launched on May 31 here. We were all together here. Over 3,000 youths have been put into training in the various areas of agricultural training. They have been taken in batches for agricultural expose at a very organized farm in Nasarawa. Each local government has been represented. In the course of the training, they were exposed to poultry, piggery, planting, fishery and many other areas.

“OYSADA deals with big farmer-investors. The primary objective of the Oyo State Agribusiness Development Agency is to create an enabling environment for agribusinesses to thrive by supporting infrastructure development and policy formulation. This we have been meeting since this government revamped this place and gave it an entirely new lift.”