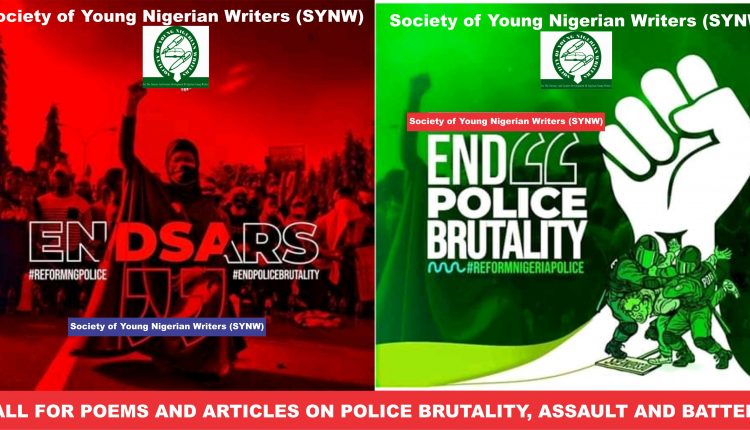 The Society of Young Nigerian Writers (SYNW), a member of the International Authors Forum (IAF) has lent her voice to the ongoing ENDSARS protest. End Special Anti-Robbery Squad (End SARS) or #EndSARS is a decentralized social movement against police brutality in Nigeria. The slogan calls for an end to the Special Anti-Robbery Squad (SARS), a controversial unit of the Nigerian Police Force with a long record of abuses

This was contained in a press statement issued and signed by the national President of the Society, Wole Adedoyin  in Ibadan yesterday.

According to the statement, “As writers, we must reflect and interpret happenings in our society; we must also provide inspiration and guidance. Address various important themes or the goings on in our society, with the purpose of edifying its virtues and condemning the vices so as to elevate the good deeds or correct the society where it goes wrong. For few weeks now, Nigerians have shared both stories and video evidence of how members of SARS engaged in kidnapping, murder, theft, rape, torture, unlawful arrests, humiliation, unlawful detention, extrajudicial killings, and extortion in Nigeria. SARS officers have been alleged to profile youths based on fashion choices, mount illegal road blocks and searches, conduct unwarranted temperature checks, arrest without warrant, rape women, and extort young Nigerians for driving exotic vehicles and using iPhones. According to Amnesty International’s 2016 report, SARS is indicted and responsible for human abuse, cruelty, degrading treatment of Nigerians in their custody, and other widespread torture. Some of the human rights abuses by SARS include the shooting of their detainees in the leg, mock or threats of execution, hanging and severe beating. A 2020 publication by the organization indicated that between January 2017 and May 2020, they had documented 82 cases of abuses and extra judicial killings by SARS.”

“As writers, we cannot sit and be looking; we must contribute our literary and poetic voices to the ongoing protest. In order to achieve this, The Society of Young Nigerian Writers (SYNW) has opened a literary blog @ www. https://endsarswritersmovement.blogspot.com/ solely created to publish poetic and literary voices of young Nigerian writers on their opinions and views on the ongoing ENDSARS protest in the country.

The proposed online anthology focuses exclusively on the theme of “POLICE BRUTALITY, ASSAULT AND BATTERY IN NIGERIA” and only works relating to the theme will be accepted for publication. Writers are free to write on their personal experience or those of others in the form of essays, articles or poems using any title of their choice. There is no monetary prize attached and submission is free and open to writers across the world. There is no deadline for submissions as entries received will be immediately uploaded on https://endsarswritersmovement.blogspot.com/. Intending entrants should submit the following alongside their entries: Name, age, gender, location, phone number, school, permission to publish your work in one or two sentences, and a short bio of no more than 40 words should be included in the submission. Entries should be sent to endsarswritersmovement@gmail.comand copy to societyofyoungnigerianwriters@gmail.com. Only well edited entries will be published.

Sòrò Sókè And its Resounding Echoes into The Nigeria’s Political History|Williams F.

LEKKI BLOODBATHS: Who Gave The Order?