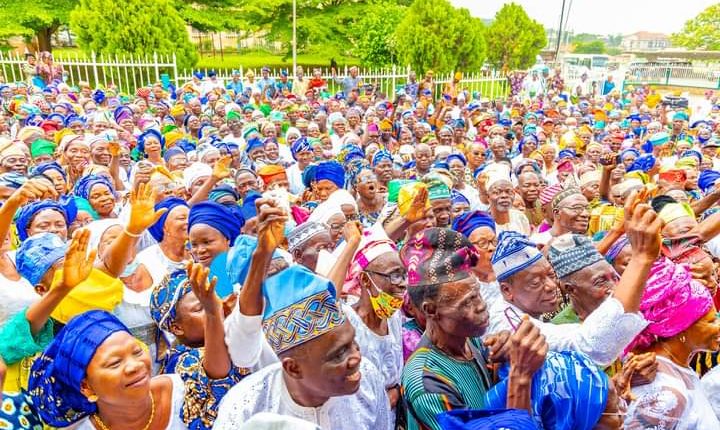 • As they stage solidarity rally to governor’s office

Members of the Nigeria Union of Pensioners (NUP), Oyo State chapter, on Tuesday, staged a solidarity rally at the state governor’s office, Ibadan, declaring that Governor Seyi Makinde has proved to be a grandmaster of meaningful administration.

Led by its state secretary, Olusegun Abatan, the pensioners said evidence of deft planning by the Makinde government have rubbished those who initially thought that the Oyo governor was a neophyte in government.

Abatan said the evidence of deft planning could be seen in the fact that despite COVID-19 and its attendant economic downturn, pensioners and workers had not been shortchanged in the past three years.

Reading an address, Abatan said the Makinde government had for the past three years continued to treat pensioners right, such that pensioners now live better lives and no more die out of non-payment of their pensions and gratuities.

The rally saw the pensioners render prayers for Makinde while urging him to remain committed to the payment of pensions and gratuities.

Abatan said: “It has been a 3year of unbroken relationship and partnership with Oyo State Pensioners. Before you came on board, anybody could know a Pensioner walking on the street with an unstable gait ready to fall at the honking of the commercial vehicles/okada.

“Many times the Union was called to come and carry our members that fell on the streets, Many died because of inability to procure simple medicaments. There was a year where we recorded 516 deaths among us. We were dying like chickens infected by Newcastle disease. But not anymore. Your Excellency, Pensioners now live better.

“If not for a good mindset as an OMOLUABI, circumstances in the polity abound to renege on our agreement and commitment to continue to pay pensions and gratuities. You did not use the COVID-19 pandemic and the economic downturn which other Emperor governors are using to shortchange their Pensioners and Workers in their various States.

“Your Excellency, right from the 2019 electioneering campaign to when you came on board as governor nobody gave you a chance. You were tagged a neophyte in government but with deft planning you have proved to them that you are indeed a grandmaster of meaningful administration with abounding evidence in all parts of the State.”

Responding, governor Seyi Makinde assured of his commitment to the welfare of workers and pensioners, while calling for more prayers for his government to continue to succeed.

JUST IN: Poly Ibadan Female Student Who Was in Coma After Marathon S3x Dies