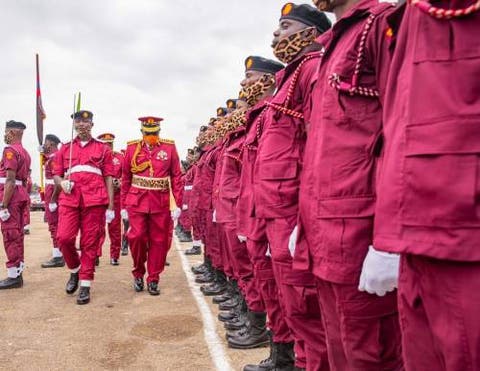 South-West governors have ordered the Western Nigeria Security Network, WNSN, codenamed Amotekun, to begin a 24-hour patrol of the states in the region to ensure hitch-free Yuletide.

Chairman of the South-West Governors Forum and Ondo State Governor, Rotimi Akeredolu, said this during the flag off of the patrol exercise at Owena, a boundary community between Ondo and Osun states.

Akeredolu, who spoke through his Senior Special Assistant on Security Matters, Jimoh Dojumo, said the exercise was to ensure a peaceful and hitch free festive season across the region.

The South-West governors’ order came as the Federal Government issued a strong warning to the Nigerian Immigration Service, Nigeria Security and Civil Defence Corp and the Nigeria Correctional Service, that there must not be any breach of security in any of the country’s institutions, facilities, organisations and installations during the Yuletide period.

Also, the new Ondo State Commissioner of Police, Mr. Oyediran Oyeyemi, has resumed duties and promised to work with Amotekun and other security agencies to ensure a safe and secure environment for all residents in the state.

He said: “I am ready to work with all security agencies under the law, and stakeholders to make Ondo State crime-free.

“I have strong belief that the current security problem confronting the country will be a thing of the past. We just need to stitch some edges,’’ he said.

Why Amotekun must patrol borders

Akeredolu said that the governors are out to ensure that the people in South-West states move freely without fear of attack by hoodlums and criminals.

He pointed out that the Amotekun Commander in Ondo State would be coordinating all other commanders across the states in the region.

The steps and actions that commanders would be taking, according to him have received the blessings of all other state governors in the South-West.

“The people should cooperate with Amotekun because they are there for their interest. They should help Amotekun to help themselves during this festive season.’’

Earlier, the chairman of the WNSN, who is the Ondo State Commander of Amotekun, Adetunji Adeleye, said that 310 personnel would be deployed across major routes across the states for enhanced inter-border patrol during the festive season.

Present at the flag off ceremony was the Osun State commander, Brig- Gen. Basir Adewinbi.

Adeleye said that the exercise will involve officers patrolling the roads in the states on 24 hours basis.

“It will guarantee the safety of vehicles plying the roads especially during this Yuletide period when we expect heavy flow of vehicles day and night.

“This is in continuation of our operation ‘clean up’ which has yielded tremendous results in the area of curbing criminal activities in the state. It is going to be a routine that will go on throughout this period until the New Year. After the New Year celebration, we will review the security situation, and determine if it should be continued.

“We have deployed 750 men across the 18 local government areas of Ondo State. We have also set aside 210 men for the borders patrol cutting across Ekiti, Ogun through the riverine areas and we are also going to cover from Ilesha to Owena-Akure in conjunction with 100 personnel from Osun.”

He noted that the personnel will work round the clock with other security agencies to ensure that the yuletide period is free of crime.

Adeleye said that timely information by drivers, commuters and residents will go a long way in helping the agency to achieve its end result of securing the people.